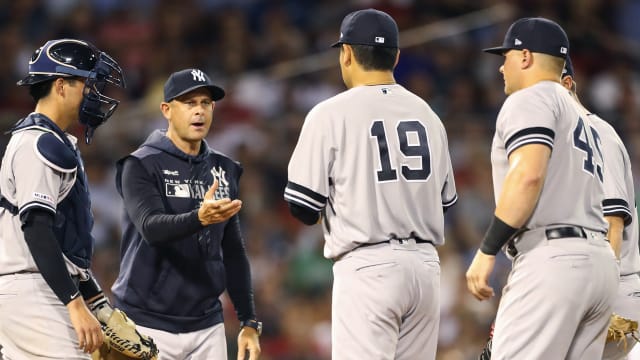 The Red Sox defeated the Yankees 19-3 to cut their deficit to New York in the division to 10 games. They did so by once again shelling starter Masahiro Tanaka.

Boston knocked Tanaka out of his start in the London Series in the first inning, and while they did not do that on Thursday, they started crushing him from the very beginning.

The Red Sox plated seven runs in the first inning off Tanaka, the most scored in an opening frame for Boston against the Yankees since 1989.

They scored 12 runs off him in total, which is the second most any team have scored off a Yankees pitcher since earned runs became official in 1913.

His second HR made it 19-3. pic.twitter.com/2HSldjBv5D

New York probably will not want to pitch Tanaka against Boston in the postseason if the two teams somehow face off.

The Red Sox have 11 games left this year against the Yankees and will go into Friday's matchup with Andrew Cashner on the mound.

Daniel Murphy went three for five with a home run, double and two RBIs in the Colorado Rockies' 8-7 win over the Washington Nationals.

Nelson Cruz went three for five with three home runs in the Twins' 10-3 win over the Chicago White Sox. Minnesota hit five homers in the game and have now hit five or more home runs nine times this season, which breaks the all-time record set by the Red Sox in 1977.

The Baltimore Orioles needed 16 innings to earn a 10-8 win against the Los Angeles Angels, with a two-run homer from Jonathan Villar eventually settling the outcome shortly before 1:30am in Anaheim.

Lucas Giolito gave up seven runs in five innings of work and three home runs to Cruz in his first three at-bats.

The St Louis Cardinals tied a franchise record by belting 12 home runs in their series against the Pittsburgh Pirates.

All of the homers!

We've tied a franchise record by hitting 12 home runs in this series. pic.twitter.com/ygUDJXeCWR

The Phillies have not played great this year, but they still sit just 5.5 games back of the Braves for first in the National League East with a three-game series coming up. They get to start with Jake Arrieta (8-7, 4.40 ERA), too, which could get the series going nicely. The problem is, they will have to face Mike Soroka (10-2, 2.46), who has been very good this season.