Records for Chupkov, Smith and Dressel as Manuel maintains domination 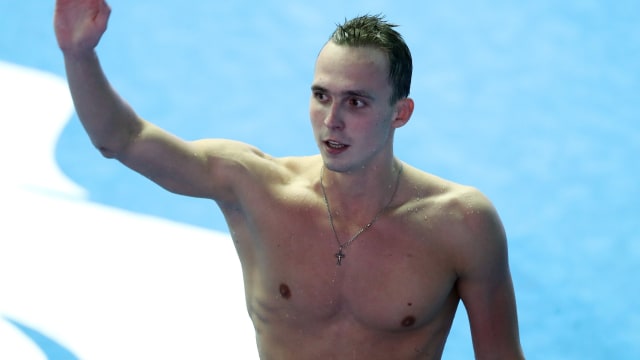 Three world records were broken in stunning fashion in the pool at the World Aquatics Championships on Friday as Anton Chupkov took the men's 200 metre breaststroke gold.

Chupkov, Regan Smith and Caeleb Dressel all set new marks, but it was the Russian who delivered in a final, denying holders of the previously shared world record Matthew Wilson and Ippei Watanabe.

Wilson and Watanabe looked set to battle out for the title until Chupkov emerged at the last, coming home in two minutes and 6.12 seconds.

That was the penultimate race of the night and there was more drama still to come, with Australia just edging the men's 4x200m freestyle relay.

Great Britain led at 700m but missed out on the podium altogether, with Russia second and United States third as five teams tussled all the way.

The semi-finals of the women's 200m backstroke and the men's 100m butterfly were far less evenly matched, however.

Smith touched in 2:03.35 to take the backstroke record, shattering Missy Franklin's best from the 2012 Olympics by almost 0.7 seconds.

Franklin only had praise for 17-year-old Smith, sending her a message on Twitter.

"Well dear friend, we had a great run," she wrote.

Well dear friend, we had a great run. Seven years and I couldn’t be more honored to have my 200 back World Record broken by @reganesmith4 , one of the sweetest and hardest working athletes I’ve ever known. Keeping this World Record with an American flag by it means everything... pic.twitter.com/NgIcysjGWs

"Seven years and I couldn't be more honoured to have my 200 back world record broken by @reganesmith4, one of the sweetest and hardest working athletes I've ever known.

"Keeping this world record with an American flag by it means everything. I was truly blown away watching Regan swim a 2:03.3 (yes, I typed that right) and absolutely smash it.

"I've said it before, and I'll say it again. People will forget your times, they'll forget the colour of your medals, but they will never, ever forget how you made them feel.

"I truly couldn't be happier seeing my world record go to someone who I believe at the bottom of my heart is one of the greatest inspirations and kindest humans in the world.

"Congrats my dear @reganesmith4. Thank you. For sharing your gift with us. You're beyond a joy to watch."

Another USA great also lost their record to a compatriot as Michael Phelps saw a best topped, with Dressel going 49.50.

More American success came through Simone Manuel, who followed up victories at the 2016 Olympics and 2017 championships with another gold in the 100m freestyle.

Yuliya Efimova, in the women's 200m breaststroke, and Evgeny Rylov, in the men's 200m backstroke, similarly defended their titles.