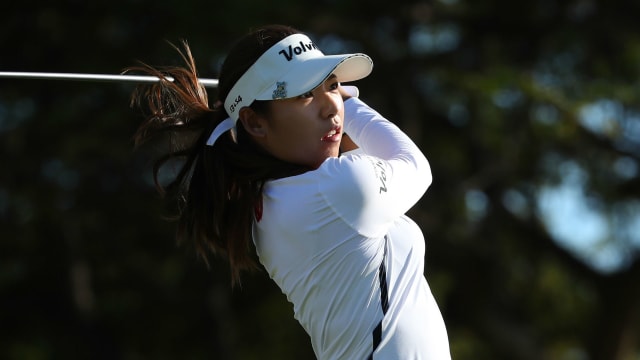 Lee Mi-hyang heads a South Korean-dominated leaderboard at the halfway stage of the Evian Championship after first-round leader Paula Creamer fell from contention with a nightmare Friday outing.

Creamer shot a superb 64 on Thursday at Evian-les-Bains but the former U.S. Women's Open champion's latest major bid hit trouble as she carded a five-over 76.

She is tied 24th on two under overall, despite not dropping a shot for her first 30 holes of the competition. A missed six-foot putt for par on 13 on the other side of a one-hour lightning delay set in motion a dismal run that saw Creamer play the final six holes in seven over.

Lee and her compatriots were the main beneficiaries – the 26-year-old ending her round birdie, birdie, eagle in stark contrast to Creamer.

That meant a 67 to go alongside Thursday's 65 and 10 under through 36, although there is plenty of major-winning pedigree in the chasing pack just one shot back.

.@hyang2golf was understandably excited after her birdie-birdie-eagle finish during Round 2 @EvianChamp. She currently leads by one.

This just might be the most bubbly interview @KentPaisley has ever conducted!

World number one Park Sung-hyun has compiled rounds of four and five under, while Kim Hyo-joo – winner in her first major at the Evian Championship back in 2014 – shot 64

China's Shanshan Feng has similarly carded two rounds in the sixties to lie fifth on seven under. Sweden's Caroline Hedwall was the only player to match Kim's seven under on Friday and is one of six on six under going into moving day.