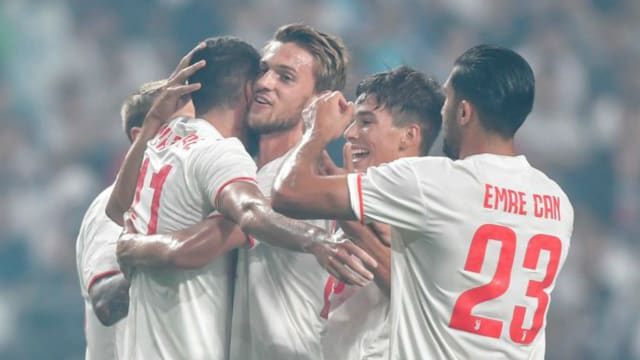 Juventus needed two quickfire second-half goals to salvage a 3-3 draw against Team K League in an exhibition match in Seoul on Friday.

Blaise Matuidi's header and a splendid solo effort from midfielder Matheus Pereira three minutes later ensured Juve avoided what would have been a second defeat in three pre-season outings under Maurizio Sarri.

The Serie A champions named a relatively strong starting side, including new signing Matthijs de Ligt, for the clash with a selection of South Korea's best domestic performers.

There was nothing Netherlands defender De Ligt could do about the stunning seventh-minute opener, though, as FC Seoul midfielder Osmar unleashed a 25-yard rocket into the top left corner.

Cristiano Ronaldo took no part in the match but Cesinha invoked his spirit by mimicking the Portugal legend's famous goal celebration.

The collection of locally-based stars had more to celebrate when Adam Taggart extended the margin to 3-1 five minutes after the interval, but the introduction of Leonardo Bonucci, Adrien Rabiot and Matuidi on the hour laid the foundation for the Bianconeri's late fightback.

Juve's next scheduled game is against Atletico Madrid in Stockholm on August 10.