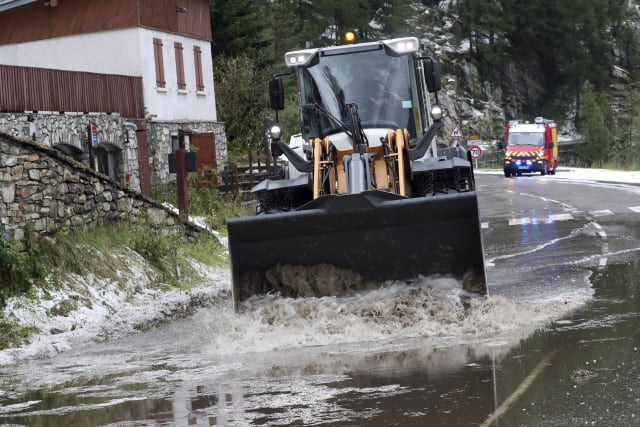 Stage 19 of the Tour de France ended in chaos as an intense hailstorm and a landslide forced organisers to stop the race before the final climb.

Organisers declared that times would be taken from the top of the Col de l’Iseran, putting Team Ineos rider Egan Bernal into the yellow jersey after he crested the highest point of the Tour first after attacking out of the group of favourites on the 126.5km stage to Tignes.

Bernal had attacked after Geraint Thomas and Steven Kruijswijk made moves in what proved a successful bid to shake off Julian Alaphilippe, who cracked midway up the Iseran.

Provisional results showed Bernal leading by 45 seconds from Alaphilippe, with Thomas a further 18 seconds back in third.

However, several teams were thought to be unhappy with the outcome and the results may take some time to become official.

Commissaries made the call to stop the race after the storms led to a landslide in the valley below Val-d’Isere, with the race route covered in rubble.

Alaphilippe looked frustrated as he climbed into a Deceuninck-Quick Step car as he would have hoped to have taken time back on the long descent, though it will never be known if he could have avoided further losses on the final climb up to Tignes.

Bernal is now the favourite to be on the top step of the podium in Paris after cresting the Iseran around 50 seconds ahead of a group containing Thomas and Kruijswijk, and more than two minutes ahead of Alaphilippe, whose fairytale run in yellow is over.

Riders were told to continue the descent off the Iseran as far as Val-d’Isere, where team cars were waiting for them.

It was yet another dramatic twist in the Tour, hailed as the most exciting edition since 1989, and could well be a decisive one.

Bernal now needs only to survive one final mountain stage on Saturday before potentially celebrating his first Grand Tour victory in Paris a day later.

The 22-year-old would be the first Colombian to win the Tour and the youngest to succeed in the post-war era.

The neutralisation came as a huge blow to Thomas’ hopes of defending his title. The Welshman may have hoped to bridge the gap to his team-mate in the final 30 kilometres but was denied that opportunity.

Thomas was seen talking to Tour director Christian Prudhomme in Val-d’Isere, but the Frenchman could only gesticulate that there was nothing he could do given the conditions of the road up ahead, where diggers and ploughs were working to clear a path.

Earlier in the day, France’s best hope of ending a 34-year wait for a home winner, Thibaut Pinot, was forced to abandon the race with a left thigh injury.

No regrets for Luther Burrell after early return from rugby league