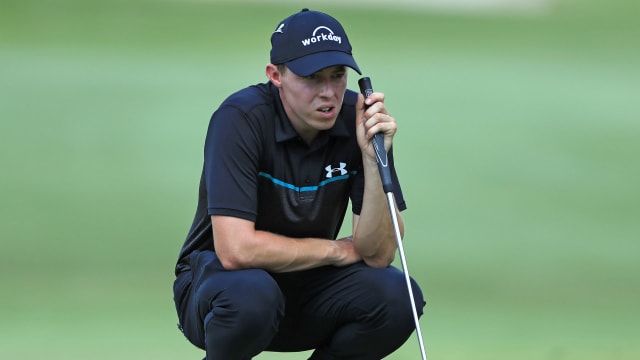 Matthew Fitzpatrick claimed a two-stroke lead after the second round of the WGC-FedEx St. Jude Invitational.

Fitzpatrick climbed 12 spots to the top of the leaderboard with a six-under-par 64 in Memphis on Friday.

His round was highlighted by four consecutive birdies at the start, and he had just one hiccup with a bogey on the par-three 8th hole.

Fitzpatrick finished with seven total birdies as he heads into the weekend at nine under through 36 holes.

Close behind Fitzpatrick in second place is Jon Rahm (71), who is in a four-way tie alongside Patrick Cantlay (68), Cameron Smith (68) and Billy Horschel at seven under following day two.

After a mistake-free first round (62), Rahm had four bogeys on Friday. He did finish with back-to-back birdies on the 16th and 17th holes to stay close to the front.

Horschel (66) had the best round of the bunch in contention and used an eagle on the par-five third hole to jump up the standings.

Justin Rose, Brooks Koepka and Bubba Watson are four shots off the pace ahead of Saturday's third round.

Koepka had four birdies and a bogey for a second-round 67, while Rose posted a 68 and Watson recorded a 70.

Can't get much closer than this. @DJohnsonPGA birdies the 15th @WGCFedEx.#LiveUnderParpic.twitter.com/9zq3IYxXL5

Former world number one Rory McIlroy shot a three-under-par 67 to be four under overall, a shot ahead of defending champion Justin Thomas (69).

Dustin Johnson – the 2016 winner – recorded back-to-back 69s to be seven strokes behind Fitzpatrick, while Jordan Spieth's consecutive 70s left him even par at the halfway stage.