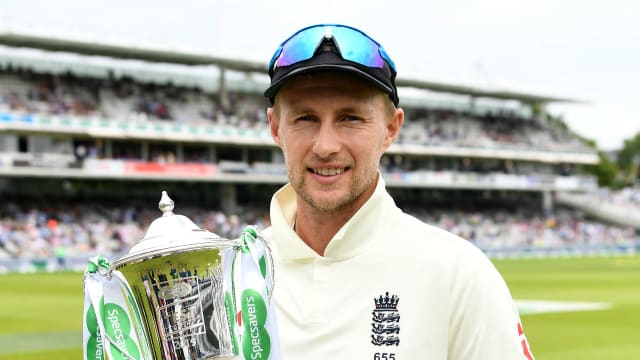 Joe Root felt England gave a timely demonstration of their calm under pressure after blowing Ireland away at Lord's on Friday.

Set 182 for a historic maiden Test victory, the visitors crumbled to 38 all out – Chris Woakes and Stuart Broad sharing all 10 wickets in a masterful demonstration of seam and swing in helpful conditions.

It meant England's blushes were spared after a dismal 85 all out on the first morning left them staring at a humiliating defeat.

"I know that that was a lot of runs on this surface," Root said at the post-match presentation, before alluding to last year's dramatic win over India in similar circumstance at Edgbaston – the venue for next week's first Ashes Test against Australia.

"We've been in this position before, we found ourselves in a similar position at Edgbaston last year so we knew that we'd been able to manage a similar sort of scenario.

"I think it was important that we stayed calm, in control of what we wanted to do and asked the right questions - and that's exactly what we did."

"The biggest part of this match was us picking up 10 wickets on day one because if Ireland had got a huge lead that would have been it.

"A lot has happened in two and a half days!"

Hands up if you enjoyed that win! @englandcricketpic.twitter.com/UzGrTzJPWC

Ireland captain Will Porterfield called on his Test rookies to take lessons from an ultimately bruising experience that promised so much.

"It all happened pretty quickly - they exploited the overcast conditions," he said.

"All the dismissals were lbw, bowled or caught by slip or keeper - the exact dismissals a bowling side is looking for on that pitch in these conditions.

"It's a big learning curve for the lads."