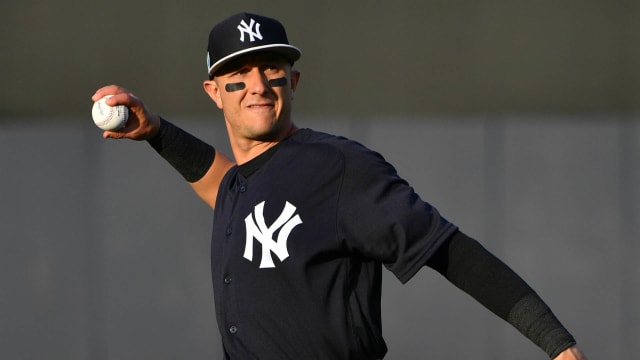 Troy Tulowitzki announced his retirement from baseball on Thursday after 13 MLB seasons.

The 34-year-old has been on the New York Yankees' injured list since the first week of the season with a calf problem and has not played in the majors since April 3.

"For as long as I can remember, my dream was to compete at the highest level as a Major League Baseball player … to wear a big league uniform and play hard for my team-mates and the fans," Tulowitzki said in a statement released by the Yankees.

"I will forever be grateful for every day that I've had to live out my dream. It has been an absolute honour.

"I will always look back with tremendous gratitude for having the privilege of playing as long as I did. There is no way to truly express my gratitude to the fans of Colorado, Toronto and New York. They always made my family and I feel so welcome.

"I want to thank the Yankees organisation and Brian Cashman for giving me the opportunity to wear the Yankees uniform and live out another childhood dream. I wish that my health had allowed for a different ending to that chapter."

“I’m saying goodbye to Major League Baseball, but I will never say goodbye 2 the game I love. Thanks again 2 all of you!” - Troy Tulowitzki

While his playing time and production had tailed off in recent seasons, Tulowitzki will be best remembered as a perennial All-Star and MVP candidate during his time with the Rockies.

Drafted seventh overall by Colorado in 2005 out of Long Beach State, Tulowitzki made the majors the following season and was edged out by Ryan Braun in National League (NL) Rookie of the Year voting in 2007 as he hit .291 with 24 home runs and 99 RBIs.

He mostly maintained that type of productivity during his time in Colorado when healthy, but that proved a significant caveat. He topped 143 regular-season games only once after his rookie year and was regularly dogged by injuries.

Despite that, he was named an All-Star five times in six seasons from 2010-15 and finished in the top 10 in NL Most Valuable Player voting each year from 2009-11. He also won a pair of Gold Glove and Silver Slugger awards.

Colorado traded him to Toronto in July 2015 and he helped the Blue Jays reach the postseason in his first two years there, but his numbers never matched his output from his peak years with the Rockies.

Tulowitzki sat out all of last season due to bone spurs and was released in December, but the Yankees picked him up a few weeks later in a low-risk move, as Toronto were on the hook for the bulk of the remaining $38million on his contract.

After what has amounted to another lost season, though, Tulowitzki is done.

"While this chapter is now over, I look forward to continuing my involvement in the game that I love … instructing and helping young players to achieve their goals and dreams," he wrote in the statement.

"I'm saying goodbye to Major League Baseball, but I will never say goodbye 2 the game I love. Thanks again 2 all of you!"

The University of Texas baseball program announced Tulowitzki will be an assistant coach with the team moving forward.