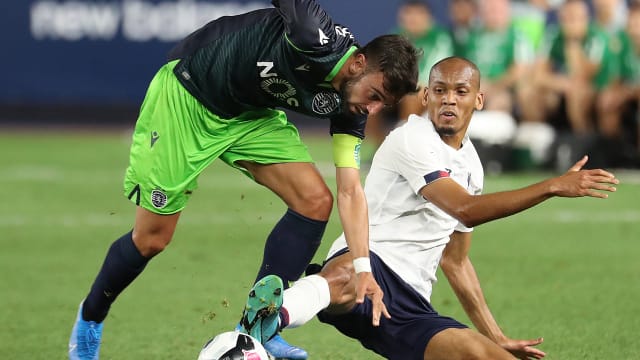 Jurgen Klopp discussed potentially facing Bruno Fernandes again this season after Liverpool were held by Sporting CP in a friendly on Wednesday.

Fernandes, who is heavily linked with a move to Manchester United, scored and set up another in the 2-2 draw at Yankee Stadium.

The 24-year-old Portugal international has reportedly been a target for Liverpool previously, but he impressed amid growing talk of a move to Old Trafford.

Klopp said the midfielder would only make Liverpool's Premier League rivals stronger if he made the move to United.

"If he will do that [join United], then we will face him," he told a news conference.

European champions Liverpool have endured a quieter close season and Klopp has suggested there could only be one further addition to his squad during this transfer window, having signed 17-year-old defender Sepp van den Berg from PEC Zwolle.

But, asked whether that injury would impact Liverpool's transfer plans, Klopp said: "No.

"The injury will not have an influence on our transfers."

Divock Origi and Georginio Wijnaldum were on the scoresheet for Liverpool against Sporting as they finished their tour of the United States winless.