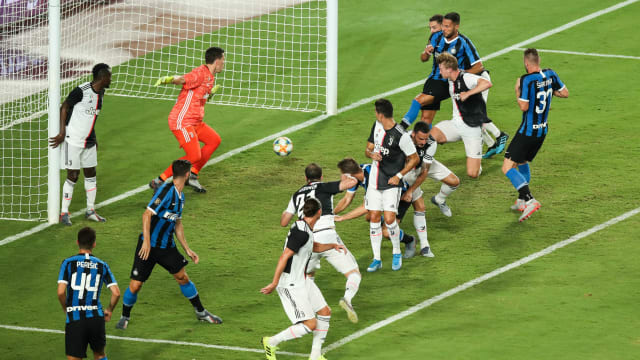 Buffon made three saves in a shoot-out to earn Juve a 4-3 victory on penalties following a 1-1 draw in Wednesday's International Champions Cup clash in China.

De Ligt's own goal 10 minutes into his first Bianconeri start handed Inter the lead, with the new signing turning into Juve's net from Stefano Sensi's corner.

Sarri's side were second best up until the interval but a rejuvenated second-half performance was rewarded when Cristiano Ronaldo's deflected free-kick restored parity, allowing Buffon to be the hero on penalties.

"Buffon's great strength is that he's a born fighter. He was ready when called upon and was extraordinary in the shoot-out," Sarri told Sportitalia.

"Ronaldo had the usual excellent performance. We can improve a great deal in our attacking moves and that would make it easier for him.

"We can improve, particularly on pressing high to win the ball back when defending. We must focus on defending by going forward, not allowing them to get behind us.

"It's normal that it takes a while to change that mentality. I made a mistake this morning, as I got them to have a 45-minute training session, but we felt it in this heat."

"I think there were improvements since the game against Manchester United [a 1-0 loss]," Conte told Inter TV. "The important thing is that the intensity gets into the minds of the players. We need to play intense football and go to press the opposition.

"I have to consider myself very happy with the result, because I have a group of players who are working very hard. Having said that, we lost on penalties and we must always be irritated by defeat, even if it’s in a shoot-out for a friendly.

"I am starting to see glimpses of an identity and our way of taking to the field. We must continue along this path: head down, work hard. There is much to do."