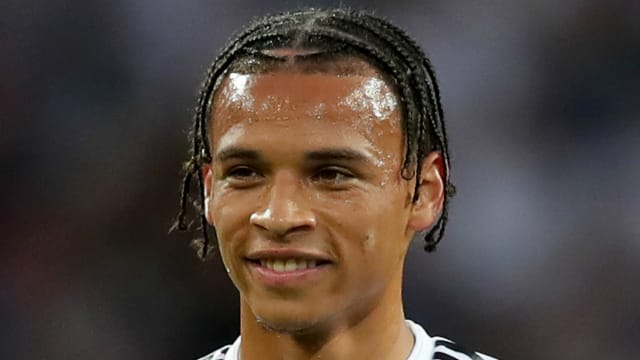 Leroy Sane lived up to Bayern Munich's claim that he is a "dream player" by scoring twice in Manchester City's 6-1 friendly victory over Hong Kong Premier League champions Kitchee.

Pep Guardiola watched Raheem Sterling put in an all-action display with a superb assist and a well-taken goal, and there were further strikes from David Silva, teenage forward Nabili Zoubdi Touaizi and Jose Angel Pozo in a one-sided match.

But with Sane's future already the subject of speculation his performance and goals caught the eye.

Bayern head coach Niko Kovac reiterated his desire to sign the 23-year-old Germany international in the build up to the game, but City boss Pep Guardiola remains hopeful of keeping Sane in Manchester long into the future.

The winger scored 10 Premier League goals in each of his last two seasons at Etihad Stadium and appears to be shaping up for another impressive campaign as City chase a third consecutive title.

@leroysane19 picks his spot in style!

City hit the crossbar after six minutes when Kevin de Bruyne's cross found Sterling in the box and his close-range shot ricocheted off the frame of the goal.

But Guardiola's men took the lead 10 minutes later when Sterling received the ball 30 yards from goal, turning and releasing Silva with an exquisitely judged pass before the veteran Spaniard dinked the ball over the onrushing goalkeeper and into the far corner of the net.

Kitchee struggled to cope with City's high-intensity interplay and the tourists scored a second when Sterling toe-poked a pass across the edge of the box to Sane, who sent a shot bouncing into the bottom left corner of the net.

There was time for a third before the interval, Gundogan flicking the ball to Silva who deftly rolled it into the path of Sterling and the England winger hooked a curling shot into the far corner of the net from a tight angle.

De Bruyne's trickery and powerful shot eight minutes into the second half deserved a goal but his shot was parried to the feet of Sane, who cut back onto his right foot before rifling the ball into the top corner.

Just seven minutes after his introduction as a late substitute, Touaizi capitalised on the space afforded to him by the Kitchee defence as he curled a low shot in off the post from the edge of the box.

After Kitchee found a late consolation, there was still time for Pozo to score from the edge of the six-yard box with the goalkeeper stranded.