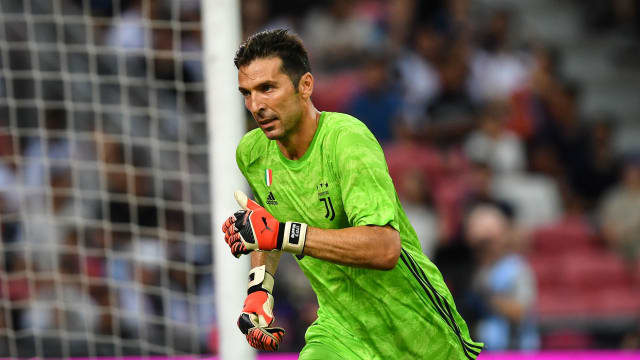 Matthijs de Ligt scored an own goal on his first Juventus start but Gianluigi Buffon proved the hero for Maurizio Sarri's side as they beat Serie A rivals Inter 4-3 on penalties after a 1-1 draw in the International Champions Cup.

Having come on in Juve's defeat to Tottenham, big-money signing De Ligt was handed a full debut for the Derby d'Italia encounter in China, but the occasion was marred when he diverted Stefano Sensi's 10th-minute corner beyond Samir Handanovic.

Daniele Padelli brilliantly denied Ronaldo a second as penalties were required to settle the contest, but it was his counterpart Buffon - re-signed from Paris Saint-Germain - who ruled in the shoot-out.

1 - Matthijs de Ligt's own goal is the first for Juventus in the ICC. Unexpected.

Ronaldo was the first to go close in Nanjing, sending a rasping strike straight at Handanovic. But it was Inter who had the lead when De Ligt was caught out from a corner, with the youngster only able to turn Sensi's delivery into his own net.

Danilo D'Ambrosio wasted a fantastic chance to extend Inter's advantage before the half hour, heading wide from close range after getting the better of Joao Cancelo.

Padelli had to be alert when Ronaldo drilled a low effort towards the near post, before Rabiot forced Inter's substitute goalkeeper into an instinctive stop. He could do nothing to deny Juve an equaliser in the 68th minute, though, as Ronaldo's free-kick deflected in off the wall.

Ronaldo looked set to double his tally after rounding Padelli soon after, but the shot-stopper made a superb recovery challenge to force penalties.

Inter's luck appeared to be in after misses from Rabiot and Bernardeschi resulted in sudden death, though Buffon stood firm to parry out Valero's tame effort, and Demiral – who replaced De Ligt at half-time – duly tucked in the winning spot-kick.