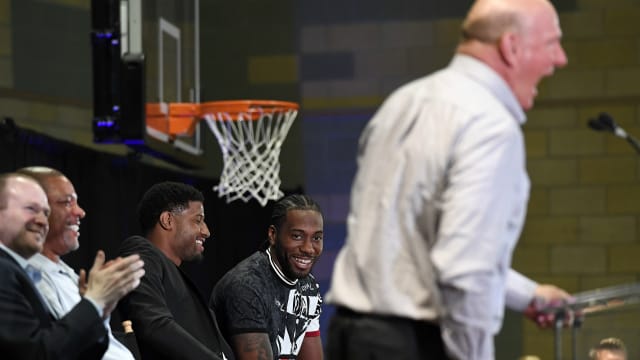 It was a landmark day for the Clippers, but a hyped and loud Ballmer stole the show as he went crazy with excitement.

"I have these notes, but I've gotta say, I'm just fired up to be here today," Ballmer started off by saying in his news conference.

Ballmer – gesturing to reporters and fans – added: "I'm pumped to say hello as Clippers to Paul and Kawhi… COME ON, GET UP! COME ON AND GET UP IF YOU'RE AS PSYCHED AS I AM!... YEAH!"

The Clippers earned plenty of admirers last season after reaching the playoffs with a 48-34 record before falling to the Golden State Warriors in the first round.

Los Angeles are yet to win a championship and Clippers head coach Doc Rivers said: "This is a great moment, but it's not our finest moment. That's coming. We're here to celebrate. This feels like a movement. Today is more about what's coming."

Leonard knows what championships are made of. He has two rings to go with two Finals MVPs.

"For me, Doc's a championship coach and that's something that I wanted," Leonard said. "The front office was transparent with me. It's an opportunity for us to build our own. We have a chance to do something special."

But, of course, Leonard had to put his own spin on the perspective around a title potentially going to the Clippers and not the Los Angeles Lakers.

"If we go to the championship and win and we get no coverage, that's fine with me," he said.

Leonard chose the Clippers and did not say goodbye to the Raptors. It felt weird, but it turns out it was just Kawhi.

All smiles in SoCal. pic.twitter.com/GkN7aT0Sgu

"I want to think the Toronto Raptors fans. I don't have social media so I'm not able to put a paragraph out or whatever," he said. "Thanks all of Toronto, the city, the country. It was a great, amazing season. It was the best parade ever."

He continued: "Thanks to the doctors for delivering my baby boy. I also just want to thank the city as far as the restaurants. They had 'Kawhine and Dine' throughout the playoffs. I took advantage of that."

George will link up with Leonard, who was drafted by the Indiana Pacers in 2011 before being sent to the San Antonio Spurs in a trade.

"I remember I was in Indy when we drafted Kawhi," former Pacers star George said. "I was a little confused by it because I was the two-guard and Kawhi was the same position and I was a bit nervous for the competition that was coming.

"But fast forward, knowing that the player I am and the player he developed into, I wish we would have kept that pick and we could have [grown] together ... It seems like this was destiny that we were supposed to play together."