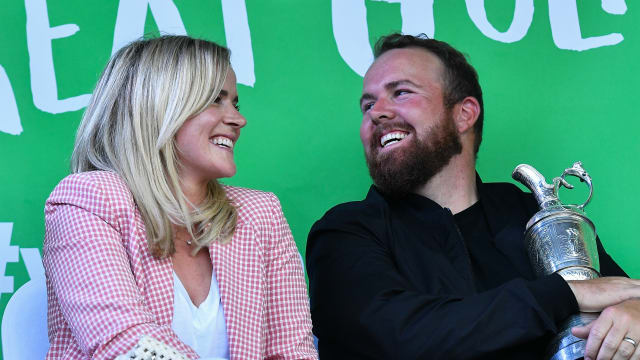 New Open champion Shane Lowry revealed he used to cry himself to sleep out of despair at his golf as he was welcomed home by thousands of fans and well-wishers in County Offaly.

The 32-year-old returned to his home town of Clara on Tuesday, two days after becoming Ireland's latest major champion.

The Clara GAA Club hosted the event as Lowry paraded the famous Claret Jug before celebrating into the night.

The famous silverware has been dubbed locally as the 'Clara Jug', and a packed field of supporters included family and friends of Lowry.

Speaking on stage, Lowry spoke of how his golfing career has not always been a success story, and it was wife Wendy's support that gave him strength to fight on.

He said: "There's been a lot of ups and downs over the last few years and I went through a fairly rough patch that finished about 10 or 12 months ago.

"People see all this and [they think] this is unbelievable and this is what it's like, but it's not really like this.

He’s in there somewhere @ShaneLowryGolf#TheOpenpic.twitter.com/yH5QWdbJQ4

"When you have a good, strong woman behind you, it makes it a little bit easier."