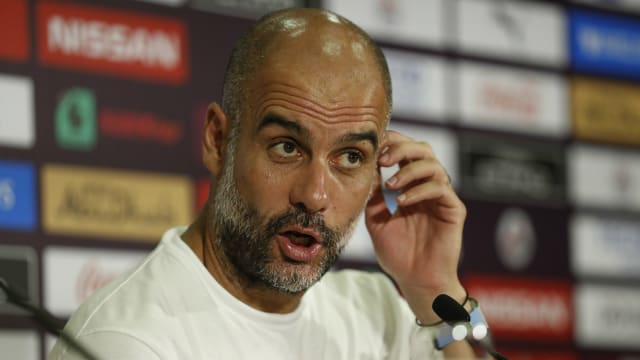 Pep Guardiola has refuted at a "false" report from China's state-run media service which accused Manchester City of only visiting the country for financial gain.

An English-language article published by the government-owned Xinhua News Agency took aim at the club's "arrogance" over a perceived disregard for local fans and media.

City squared off in Premier League Asia Trophy matches against West Ham and Wolves in Nanjing and Shanghai respectively before departing for Hong Kong, where they play Kitchee on Wednesday.

The accusations surprised Guardiola, whose attitude on the tour was cast in a negative light in comparison to the apparent "enthusiasm" of Wolves boss Nuno Espirito Santo.

"I should say I don't agree and also that it's false," Guardiola said.

"To make a statement like this, they have to know exactly what happened here in our club.

"We had an incredible time in Shanghai. We were committed to the co-operation you have to do here in China. The people from the hotel, all the people asking us to do things – we were ready to do that.

"That's why I can't understand what people are saying.

"Maybe one journalist is a bit upset, I don't know why, but it's far away from the reality."

Unbelievable scenes at our fan event in Shanghai

City's original itinerary involved two additional days in China which were lost to delays flying out of Manchester.

"For our club it's a huge experience to go abroad to other countries because we are not Manchester United, Liverpool, Barcelona, Real Madrid, Bayern Munich," Guardiola said. "They've been doing it for many years.

"For us it's a new experience every season, it will help on the pitch and we did it last season. And off the pitch we are showing what an amazing club we are and how we are trying to be better every season.

"I'm so proud of what we've done. All the marketing departments, all the people who've organised this tour.

"And maybe next year or in two years we are going to come back to China when the club decides we should come."