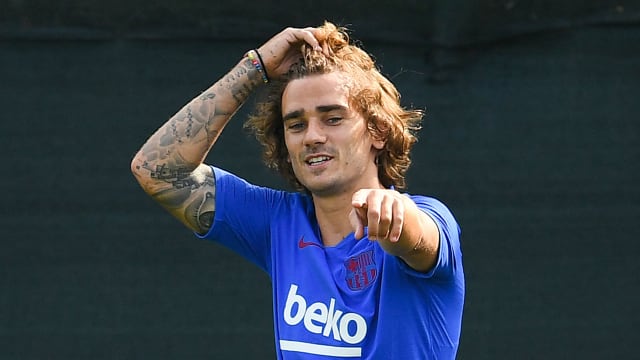 Antoine Griezmann faces a learning curve at Barcelona but Ernesto Valverde was pleased with the glimpses of debut class he saw on Tuesday.

The LaLiga champions went down to an entertaining 2-1 friendly defeat to Chelsea in Saitama, with Griezmann completing the opening 45 minutes.

He was flanked by France team-mate Ousmane Dembele and youngster Alex Collado in attack.

Netherlands midfielder Frenkie de Jong was introduced for his own bow amid a slew of half-time changes.

"Griezmann has to get used to Barcelona's play," Valverde told a post-match news conference after goals from Tammy Abraham and Ross Barkley rendered Ivan Rakitic's stoppage-time strike a consolation.

"It's easy to see how dangerous he is with the ball. He has bad intentions always for the rival.

LaLiga's 2019-20 schedule gets under way a week after the Premier League and Valverde felt his players being behind Chelsea in their preparations was a key factor in the loss.

"We started in the right way both halves with a different 11 starters. We were better the first 15 minutes," Valverde said.

"It was the first match for us, the fourth for Chelsea and we paid for that. The good thing is to see how the new and young players can play.

"It was a good test in order to compete because it's different from training."

Speculation continues to link Neymar with a sensational return to Barcelona to form an all-star forward line with Lionel Messi, Luis Suarez and Griezmann.

Valverde, who overcame the destabilising impact of the Brazil forward leaving Camp Nou to join Paris Saint-Germain at the start of his reign in 2017, refused to be drawn on the matter.

"Neymar is another club's player, so I don't want to say many things for a player who belongs to another team," he added.