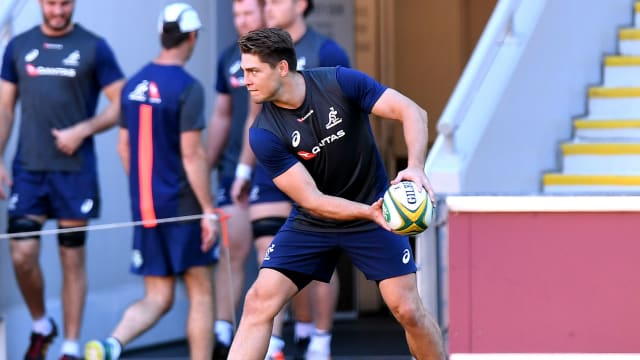 James O'Connor has put his party-boy lifestyle behind him as he seeks to reignite his Australia career.

O'Connor is in contention for his first Wallabies cap in six years when Argentina visit Brisbane in the Rugby Championship on Saturday.

The 29-year-old utility back last featured against the same opponents in 2013, before his contract was ripped up amid reports of being intoxicated and abusive towards staff at Perth Airport.

That added to a lengthy rap sheet and stalled O'Connor on 44 Test caps but his form for Sale Sharks paved the way for a return to his homeland with the Queensland Reds last week, making him available for Australia once more.

"Tuesday nights, James was always out and about doing stuff because Wednesday we have off," scrum-half Will Genia told reporters when discussing O'Connor's new mature approach.

"Tuesday night in the last three or four weeks that we've had, he's in his room stretching, doing what it takes in terms of recovery.

"He understands that this is a huge opportunity for him."

Genia believes the example of Nic White, who started the opening Rugby Championship defeat to South Africa having spent the past two years with Exeter Chiefs, shows O'Connor's reintroduction can be a success.

"You saw Whitey come back and play very well. Hopefully it can be a similar story with James because I think he was on 44 Tests and he was so young when he left," added Genia, who will retire from Wallabies duty after the World Cup.

"We all know how good he is and hopefully, the fact he's in a better space mentally, he can be an even better player this time around."