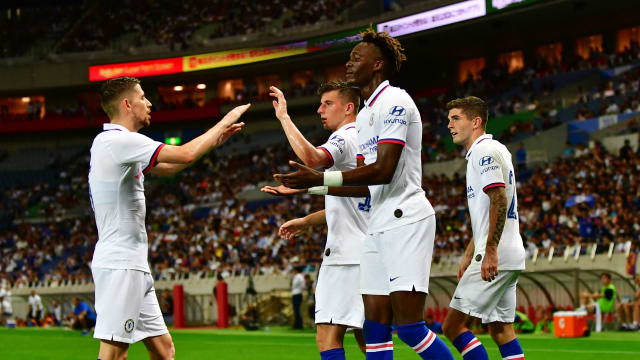 Antoine Griezmann made his Barcelona debut on Tuesday but was unable to prevent the LaLiga champions slipping to a 2-1 friendly defeat to Chelsea in Saitama.

World Cup winner Griezmann – who joined the club in a €120million move earlier this month – made little impact during his 45-minute appearance against Frank Lampard's side, who went in front through Tammy Abraham's 34th-minute goal.

Chelsea continue their preparations for the 2019-20 season with a game against Championship side Reading on Sunday, while Barca take on Vissel Kobe – and their former player Andres Iniesta – a day earlier.

Barcelona could – and perhaps should – have gone ahead inside the opening minute but Oriol Busquets' header from eight yards sailed over Kepa Arrizabalaga's goal.

Abraham was equally wasteful in the 23rd minute, blazing a half-volley over from six yards after Marc-Andre ter Stegen had failed to hold Christian Pulisic's powerful strike.

The striker made up for that miss soon after, though, coolly rounding Ter Stegen and slotting into an empty net after Jorginho had cut out Sergio Busquets' sloppy pass on the edge of the penalty area.

Goals from @tammyabraham and @RBarkley8 secure the win in our final game in Japan! #CFCinJapanpic.twitter.com/BD0JdfmUPs

Pulisic could have doubled their advantage five minutes before the interval but crashed a left-footed effort into the side netting, while a subdued Ousmane Dembele saw his low strike kept out by Kepa at the other end.

Barca were a team reborn after making 11 changes at the break, Rafinha, Carles Perez and Carles Alena all testing Kepa with low strikes in the opening stages of the second half.

Chelsea substitute Kenedy inexplicably headed well wide after latching onto Barkley's lofted pass but the England international made no mistake in the 81st minute, squeezing an effort inside Neto's right-hand post from 18 yards.

The Spanish side at least ended the game on a positive note, Rakitic thundering into the top corner from distance in stoppage time.