Pogba, Neymar, Eriksen and other wantaway stars stuck in limbo 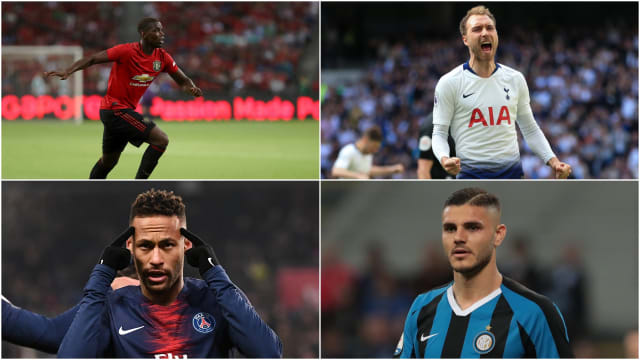 A move to either Paris Saint-Germain or the Chinese Super League looks most likely for a player who cut a frustrated figure for the majority of the 2018-19 season.

Bale is poised to be forced out at the behest of Zidane and there are a host of significant players across Europe who have yet to negotiate an exit despite expressing a desire to move on.

Here, we look at the players who are stuck in limbo with the start of the 2019-20 season just weeks away.

Neymar has not publicly stated he wants to leave the Ligue 1 champions but the club's sporting director, Leonardo, has said he can move on if the price is right.

The Brazilian superstar has yet to feature for PSG so far during pre-season and was again absent as Thomas Tuchel's side laboured to a 1-1 draw with Nurnberg on Saturday.

A possible swap deal involving Bale could be a possibility, although a move back to his former club Barcelona looks more likely. Will the Catalan giants stump up the money, though, and end the impasse?

Lukaku joined Manchester United from Everton in a £75million deal in 2017, scoring 28 goals in 66 Premier League games since then, but his performances have been much maligned.

He fell out of favour towards the end of last season and has been heavily linked with a switch to Inter as Ole Gunnar Solskjaer shakes up his United squad ahead of the new campaign.

The two clubs appear to be some way apart in their valuation of the Belgium international – who has yet to feature in pre-season – and, for now, he remains a United player.

Things have not gone according to plan at Barcelona for Coutinho following his January 2018 move from Liverpool, with the Brazilian admitting last month he does not know what his future holds.

Coutinho only managed five LaLiga goals in 34 appearances as Barca retained their crown in 2018-19, with 12 of his league outings coming from the bench.

With Antoine Griezmann now on board at Camp Nou, Coutinho's playing time is likely to be reduced even further and a move might suit both parties.

The French World Cup winner hinted at being unsettled at Manchester United last month, telling reporters he was interested in a new challenge three years after returning to Old Trafford from Juventus.

His agent, Mino Raiola, doubled down on that recently, telling The Times: "Everyone within the club, from the manager to the owner, knows Paul's wishes."

A move back to Juve has been mooted for the 26-year-old, while Real Madrid and Barcelona are also rumoured to be interested in the playmaker. United are standing firm, though, and it is looking increasingly likely that he will spend at least another season in the Premier League.

Today's #MUFC Man of the Match, as voted by the fans...

Icardi endured a controversial 2018-19 campaign with Inter, the Argentina international stripped of the captaincy amid conflicting views of an apparent knee injury and internal disagreements with the club's hierarchy.

The club's chief executive, Giuseppe Marotta, recently told the striker he was no longer wanted and both parties mutually agreed he would withdraw from their pre-season tour of Asia.

That has not hastened his departure from the club, though, with potential suitors perhaps wary of signing a player who will bring plenty of baggage.

The Denmark international stunned Tottenham supporters last month when he declared he wanted to "try something new".

Eriksen arrived from Eredivisie giants Ajax in 2013 and the 27-year-old has established himself as one of the Premier League and Europe's best midfielders.

Real Madrid and Atletico Madrid have been linked with the playmaker but no firm offers appear to have been tabled yet.