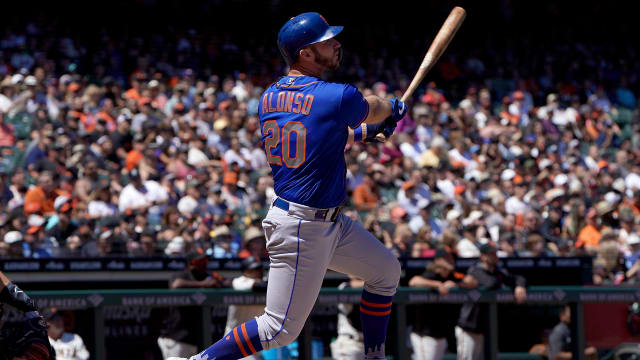 After narrowly losing to the Giants 1-0 on Friday, the Mets bounced back 24 hours later thanks to Dominic Smith and Pete Alonso.

Smith went three for five and tallied four RBIs, while Alonso blasted a three-run homer in his lone at-bat as a pinch hitter in the sixth inning on Saturday.

Pablo Sandoval was a bright spot for the Giants, going four for four at the plate.

Guerrero became the youngest player in Blue Jays history to hit a grand slam in Toronto's 7-5 win over the Detroit Tigers.

At 20 years, 126 days, Guerrero eclipsed Brett Lawrie's record by over a year with his 441-foot blast. The Blue Jays star also became the youngest MLB player to celebrate a grand slam since Jose Reyes in 2003.

Giolito gets the job done

Pittsburgh Pirates star Starling Marte went three for five at the plate and tallied one RBI in the 5-1 victory over the Philadelphia Phillies.

Antonio Senzatela gave up seven hits and six earned runs in one-and-a-half innings of work as the Colorado Rockies were beaten 11-5 by the New York Yankees.

Oscar Mercado was hitless in four at-bats as the Cleveland Indians fell to the Kansas City Royals 1-0.

Javier Baez pulled off this amazing blind tag in the Chicago Cubs' 6-5 win against the San Diego Padres.

THEY CALL HIM EL MAGO. pic.twitter.com/dVYrN8V6eG

Washington topped Atlanta on Saturday and are just five-and-a-half games back from the lead in the NL East. The Braves are trying to stay on top of the division, while the Nationals are creeping closer and threatening to close the margin.