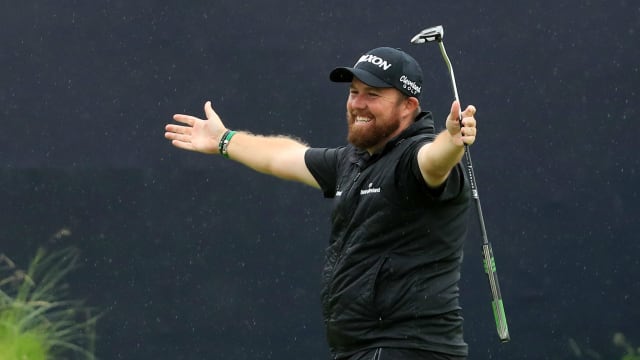 A stunned Shane Lowry said he felt like he was going through an "out-of-body experience" after cantering to Open Championship glory at Royal Portrush.

Ten years on from sensationally winning the Irish Open as an amateur, Lowry again exceeded all expectations by claiming his maiden major title with a phenomenal performance.

After pulling four clear at the top of the leaderboard with a stunning 63 on Saturday, the Irishman held his nerve to card a one-over 72 in challenging weather conditions.

Lowry's lead barely came under threat on the final day as he retained a comfortable cushion over playing partner Tommy Fleetwood.

Champion Golfer of the Year @ShaneLowryGolf#TheOpenpic.twitter.com/cTlY3qk7hR

"Honestly, I feel like I'm in like an out-of-body experience," Lowry told Sky Sports as he reflected on his efforts.

"I was so calm coming down the last hole, I couldn't believe it. What a day."

Asked how he had remained so calm under enormous pressure, Lowry replied: "I'll be really honest with you, I didn't!"

"He stayed on my back and he kept talking in my ear. He was great and what a job he did today.

"It was difficult out there, the weather was so hard. I wasn't going great around the middle of the round but then I had a look at the leaderboard and saw everyone else was struggling. And then it kind of turned into a two-horse race between me and Tommy, which was was good for me, I think.

"I just tried to focus on staying as far ahead of Tommy as I could."

After being presented with the Claret Jug, Lowry said: "To have an Open Championship here on the island of Ireland at Royal Portrush Golf Club is just amazing. To the volunteers and the fans - thank you so much, this one's for you."

The champion also showed emotion as he thanked his parents and added: "They sacrificed so much for me when I was younger and I’m so happy that I can hand them this trophy tonight."