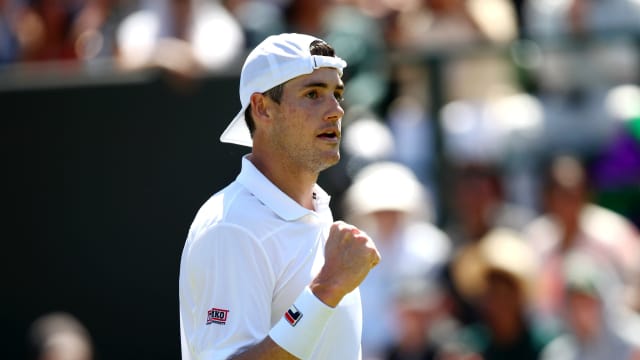 Bublik, at 6ft 5in, was remarkably the shorter man in the match by five inches as the 22-year-old competed in his first ATP Tour final.

Isner made his comeback from a broken foot when he reached the second round at Wimbledon earlier this month.

The world number 15 found trophy-winning form again at a familiar tournament on Sunday when he outplayed Bublik, a Russia-born 83rd-ranked player who represents Kazakhstan and has a flamboyant side, including underarm serves in his weaponry.

At one crucial point in the second set, Bublik played a seemingly gratuitous between-the-legs shot from mid-court and found the net, when he might have passed Isner with a more conventional play.

Isner, who landed his 15th career title, praised his opponent at the trophy presentation, telling Bublik: "It was a lot of fun to play against you today.

"You're very quirky but I mean that in a very sincere way. You're fantastic for the game and we all hope you have fantastic results in the future, because guys like you are very important to keep tennis exciting.

"I want you to keep going buddy. Good job."

Lajovic was a shock finalist at the Monte Carlo Masters in April, while Balazs retired from tennis in 2014 but returned two years later and will now be able to celebrate a career-high ranking, beating his previous best of 153, on Monday.