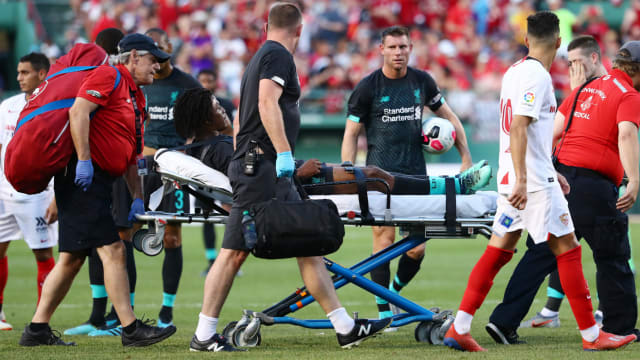 Sevilla's Joris Gnagnon issued an apology to Yasser Larouci after his horrendous challenge left the Liverpool youngster on a stretcher.

Sevilla defeated Liverpool 2-1 in Sunday's pre-season friendly in Boston, where the fixture was overshadowed by Gnagnon's shocking tackle on Larouci.

Gnagnon – a second-half substitute – was shown a straight red card with 14 minutes remaining after wildly kicking out at Larouci, who required lengthy treatment before the 18-year-old was taken away on a stretcher.

"I would like to publicly apologise to Liverpool, the family of the player and the supporters," Gnagnon wrote in a statement posted to Twitter.

"It was a heinous act on my part for whatever reason and should not be seen on a football field. All my prayers are with the player and the family."

"[It's] much too early in the season to create headlines with saying the things I think about the situation," Klopp told reporters after Liverpool succumbed to Alejandro Pozo's 90th-minute winner.

"Let me say how the situation is with Yasser; it looks like he was lucky but, of course, how it always is with these things we have to wait a little bit. He couldn't keep on playing, so that's the first not-so-good sign but in the dressing room it was OK."

Jürgen Klopp has provided an update on Yasser Larouci.

Klopp added: "He hit him full throttle and, in that moment, [if it was] a little bit different position where he hit him then it's done. He rolls… he is a sports boy so that was OK, nothing happened there.

"I don't know 100 per cent. It looks like he was lucky but I only spoke quickly to the doc and that's what he said, but we have to see."