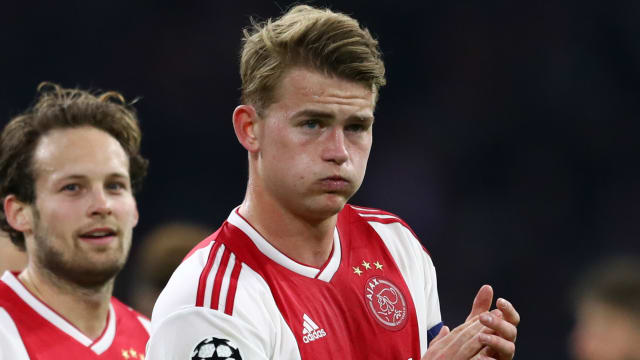 Matthijs de Ligt was left bemused by transfer stories circulating about him before his move to Juventus, particularly one concerning Manchester United and fears about his weight.

The Netherlands international completed a move to Juventus on Thursday in a deal that could cost the Serie A champions €85.5million.

De Ligt, 19, had been one of the most in-demand young players in the world following his exceptional performances as captain of Ajax, who won the Eredivisie and reached the Champions League semi-finals last season.

He was linked with a possible move to United until a story emerged in the Daily Mirror suggesting a scout had warned the Red Devils off making a bid as De Ligt would be susceptible to gaining weight as he got older, like his father.

De Ligt says such claims left him truly baffled, even amid the persistent speculation over where he would be playing football next season.

"Every day, there was something new," he told Voetbal International. "Suddenly, even my father was too fat and that's why one of the clubs wouldn't want me. That makes you go, 'Come on, man...'"

There was another rumour De Ligt turned down Paris Saint-Germain because he wanted a higher wage than Kylian Mbappe, something he previously told Algemeen Dagblad was "insane".

"Money played no role at all in my choice for a new club," he said. "Everyone who knows me, knows that. Everyone is entitled to their opinion and I will respect that, but some people were saying things like that [PSG story] very easily."

De Ligt is the latest high-profile player to secure a big-money transfer through the hugely successful agent Mino Raiola, who counts Paul Pogba, Zlatan Ibrahimovic and Marco Verratti among his clients.

"He has a lot of experience," De Ligt said of Raiola. "I think there may be a certain negative image of him in Holland, but I certainly don't experience it that way.

"I think if you ask all of his players if Mino does a good job for them, everyone would say yes. That's the most important thing. It's not about what other people say about him, it's about what he can do for me."