Barcelona side is like 'cheat code in a video game', says Griezmann 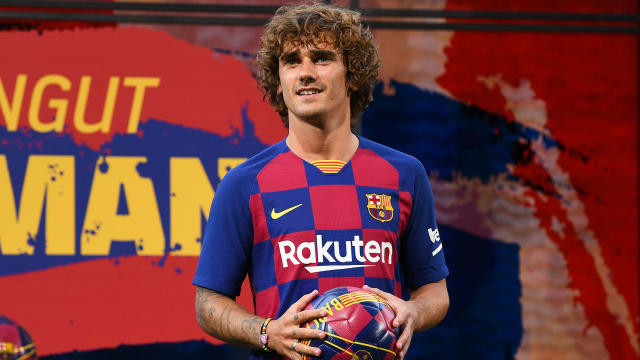 Barcelona's side for the 2019-20 campaign is like a "cheat code in a video game", according to new signing Antoine Griezmann.

The French World Cup winner joined the LaLiga giants this month after they triggered his €120million release clause with Atletico Madrid.

He joins a team rich in attacking talent and is likely to line up alongside a combination of Lionel Messi, Luis Suarez, Ousmane Dembele and Philippe Coutinho in what promises to be a mouth-watering frontline in the forthcoming season.

Griezmann is excited about linking up with his new team-mates and says entertaining the club's supporters is a primary motivation.

"Barcelona are building a team like a cheat code in a video game," he told Marca.

"We have a good team, great players and then it's the boss that has to decide who plays.

"We'll be ready to enjoy ourselves and make the fans and ourselves happy at all times."

Griezmann was particularly fulsome in his praise of Messi and vowed to strive to reach the dizzying standards set by the Argentina superstar.

"I want to catch him doing things in training that I will try to repeat or do in my own way and get to know him on and off the pitch.

"I will be ready to do whatever it takes: for him, for the club and for the players."

Atleti fans are aggrieved by Griezmann's switch to their rivals, which came a year after he had pledged his future to the club, but the 28-year-old insists he will always hold fond memories of his time with Diego Simeone's side.

"I know that there will be whistles [when he returns to the Wanda Metrpolitano]," he added. "It's part of football. They really loved me and when someone leaves, it can hurt.

"It was like that at Real Sociedad. My first visit back wasn't easy, but I will always have Sociedad and Atleti in my heart because they gave me so much."