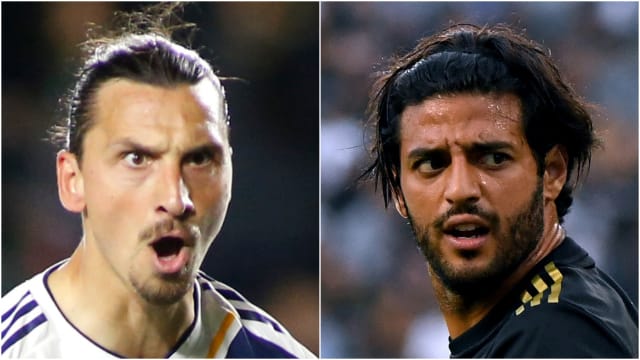 Zlatan Ibrahimovic says it was a mistake to compare him to Carlos Vela after his individual brilliance settled the Los Angeles derby.

Ibrahimovic scored a perfect hat-trick - a right-footed goal, a left-footed goal and a headed goal - as his LA Galaxy side beat MLS rivals Los Angeles FC 3-2 on Friday.

El Trafico's pre-match build-up centred on the battle between Ibrahimovic and LAFC star Vela, who has now scored 21 goals this season to top the MLS scoring charts.

Ibrahimovic said before the game he was "by far" a better player than the Mexico attacker and indicated afterwards that the comparison fired him up.

"Please do not offend me, I don't need to prove nothing, even if I don't score the goals today," Ibrahimovic told a news conference.

"I have a lot of respect for Vela, he's a good player, but you did one mistake, you [the media] compared him with me, that was your biggest mistake.

"I have a bulletproof mind. When I go out there, I know what I'm able to prove - and I do it good."

Vela scored both LAFC goals in his side's defeat, with Ibrahimovic's treble moving the former Sweden striker to 16 goals from 17 MLS appearances this term.

LAFC are nine points clear at the top of the Western Conference, with Galaxy climbing up to second spot after their third victory in four games.