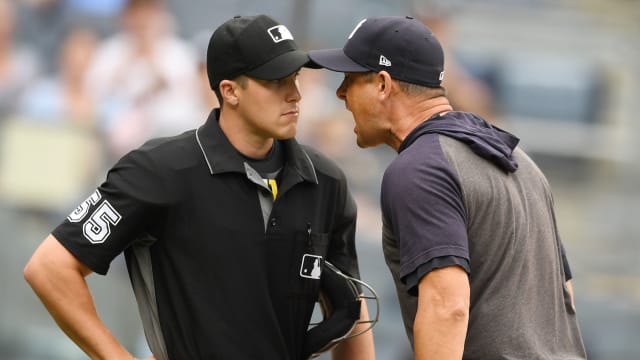 New York Yankees manager Aaron Boone has apologised for ranting at an umpire during Thursday's game with the Tampa Bay Rays, admitting Brennan Miller "handled the situation with a lot more class than I did".

Boone, who received a one-game suspension for his profanity-laced outburst, told the New York Post he had apologised to Miller.

"I called him (Friday) morning,’" Boone told the Post. "We had a good conversation. I told him he handled himself well and called a good game. I said someday we might laugh about this."

There was no laughing Thursday when Boone popped out of the dugout in the second inning of the first game of the doubleheader after Miller called out Brett Gardner on strikes.

Boone also made contact with Miller, before Miller threw him out of the game. But not after getting an earful that was picked up by microphones.

"Brennan, I thought, certainly handled the situation with a lot more class than I did," Boone told the Post. "But also, I thought, turned in a really good game."

The Yankees went on to win the game and sweep the Rays in the match-up of the top two teams in the AL East.

New York extended their lead over Tampa Bay to nine games with a win on Friday over the Rockies, but the Yankees did it without Boone, who was serving a one-game suspension.

"Yeah, I knew I made contact with my hat, and (Miller) said it right when it happened," Boone added. "That happened to me last year. I figured I’d be getting a call at some point from Joe Torre (MLB's chief baseball officer) and I did."

Josh Bard subbed for Boone as the Yankees won their fourth game in a row to improve to an AL-best 63-33.
Tags
Read Full Story