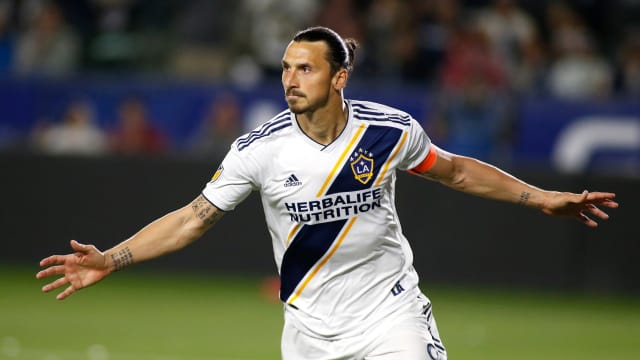 The 37-year-old Swedish star answered Carlos Vela's early spot-kick with a stunning equaliser, before a headed second and left-footed third to complete the perfect treble.

Vela scored his second late on as LA Galaxy still trail leaders LAFC by nine points after 21 games, but move ahead of Philadelphia, Seattle and DC United up to second in the overall standings.

The home side didn't have it all their own way in a fiery contest which featured eight yellow cards, as MLS top scorer Vela struck inside four minutes from the penalty spot for the Mexican's 20th goal in 20 league games.

Galaxy only needed four minutes to equalise though, as Ibrahimovic brilliantly controlled a long pass, lobbed over Eduard Atuesta and volleyed from range past Tyler Miller.

ARE YOU KIDDING US?!@Ibra_official levels the game in style! #LAvLAFCpic.twitter.com/Q9VUeKZ13f

Both teams went into half-time level, but Ibrahimovic doubled his tally after 56 minutes when he headed in Diego Polenta's cross to make it 2-1.

The former Paris Saint-Germain, Milan and Inter striker completed his hat-trick with 20 minutes to play as he dribbled to the edge of the area, before rifling into the bottom corner.

Vela pulled one back six minutes into stoppage time when he broke the offside trap to score, but time ran out for LAFC as Galaxy claimed the derby spoils.