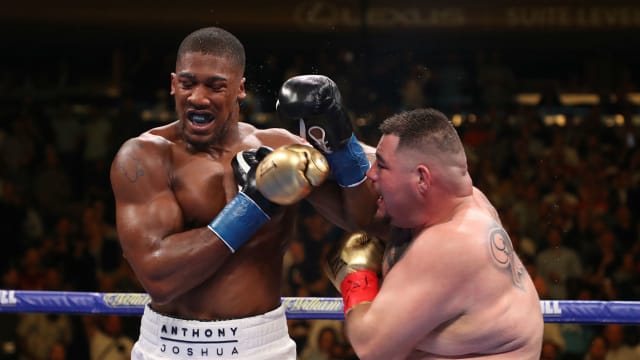 Anthony Joshua is "one million per cent" sure on taking up a rematch against Andy Ruiz Jr, according to promoter Eddie Hearn.

Ruiz stunned the world of boxing when he handed Joshua the first defeat of his professional career at Madison Square Garden on June 1, dropping him four times to claim the IBF, WBA and WBO heavyweight belts.

The bout was Joshua's United States debut, yet Hearn subsequently implied they would take a rematch back to the United Kingdom.

However, Ruiz told TMZ he would not be willing to let Joshua's camp call the shots, insisting he would not want a rematch to take place on the Briton's home turf.

Rumours then emerged on Friday suggesting the former champion was considering pulling out of discussions, but Hearn has rubbished those claims.

"Joshua is one million per cent taking this rematch. Fact," Hearn told iFL TV on Saturday.

"I spoke to Joshua last night. He is one million per cent taking this rematch. I haven't even been asked to look at other options.

Cardiff's Principality Stadium has been mooted as a potential venue, but Hearn insisted nothing has yet been decided in terms of where a rematch would be held, though the dates have been narrowed down.

"We've provided the dates to Team Ruiz, now we've got to provide the venue," Hearn added.

"The dates are November 29 or December 14, those are the dates we're working on. Of the venues that have come on in the last week, one is very serious and we're very deep in conversation.

"I think the front runner is still Cardiff, December 14. Madison Square Garden is in the running too."