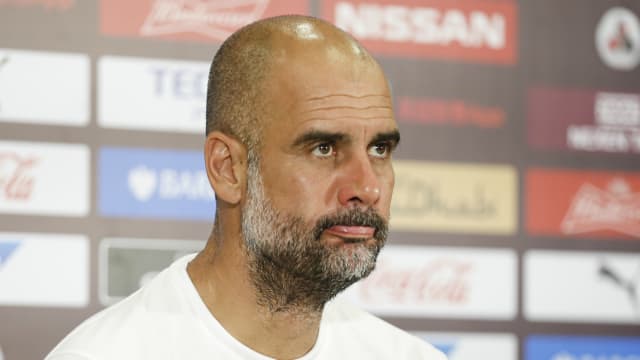 After Saturday's goalless draw in China, Rui Patricio saved spot kicks from Ilkay Gundogan, David Silva and Lukas Nmecha to secure a 3-2 victory in the shootout.

City won an unprecedented domestic treble last term but were denied the chance to add more silverware ahead of the new season kicking off.

Asked if the result worried him, Guardiola replied: "I don't think so. Sometimes it is good to lose against the Premier League teams in that period [pre-season] but honestly I don't think so.

"If we are going to lose in the future it will not be because today we lost on penalties in this competition. That is my feeling but everything can happen in sport."

PEP  (On @DeBruyneKev) Unfortunately last season we missed him a lot. We did incredibly well without him but we are stronger with him.

Hopefully he can reach his level. He is very positive in his mind.

He made an incredible first half, really good.

Kevin De Bruyne shone during the opening 45 minutes and Guardiola hailed his team's display in Shanghai despite their failure to score.

"They played incredibly well in the first half," he said. "Wolves defended so well and deep with a low block.

"It's not easy to create chances and we created and we didn't concede one counter-attack in that first half and the second first 15 minutes.

"Everybody, not just the young players, made a good performance. We [can] learn from that. We realise how difficult everything is and we are satisfied, especially with the way we played."

"He was top," Guardiola said. "Unfortunately last season we missed him a lot. We did incredibly well without him but we are stronger with him.

"Last season he had no holidays, this season he has had time to rest. Hopefully he can reach his level. He is very positive in his mind. He made an incredible first half, really good.

"He's a guy who likes to play football - a huge competitor. He never loses confidence in himself."