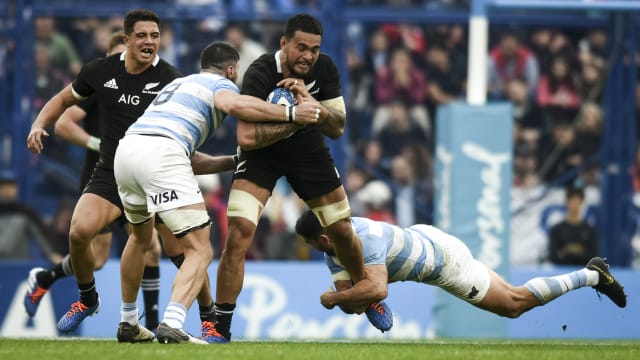 New Zealand fended off an impressive Argentina side 20-16 in Buenos Aires to secure a winning start to their Rugby Championship campaign.

After South Africa's earlier resounding victory over Australia, this was a match of a different nature and the All Blacks were clinging on at the end for their success on Saturday.

First-half tries from Ngani Laumape and Brodie Retallick looked to have put the visitors in control, but New Zealand went scoreless in the second 40 minutes.

Emiliano Boffelli pulled a try back and, come the closing stages, Argentina were camped close to the New Zealand line.

How about that goal line defence to win the match!#ARGvNZL#BackBlackpic.twitter.com/8bcrd8rGk3

However, they could not find the second try they required to earn what would have been Argentina's first victory over world champions the All Blacks in 33 attempts.

This clash followed the Jaguares' stunning run to the Super Rugby final, where they fell to New Zealand outfit the Crusaders.

A pair of early penalties, the first from Nicolas Sanchez and the second a long-range kick from Boffelli, gave Argentina a 6-0 lead inside six minutes.

Argentina were behind, though, after Laumape breached their defences in the 17th minute and Beauden Barrett booted the conversion.

Sanchez and Barrett traded penalties in quick succession before the latter added his second three-pointer, and Retallick seized on a loose pass to run clear for a crucial try prior to half-time.

Barrett added the two points again, but surprisingly New Zealand would make no further contribution to the scoresheet – the All Blacks failing to score in the second half of A test for the first time since 2011.

0 - New Zealand have failed to score in the second half of a Test match for the first time since 2011 against South Africa. Wall. pic.twitter.com/TrbF42yRmI

New Zealand still achieved a 450th international win but not without a scare.

A fine kick from Sanchez created the chance for Boffelli to dot down in the 47th minute. Sanchez added the conversion and Argentina, largely camped in New Zealand's half, were within a try with over half an hour left on the clock.

Sanchez missed a penalty that could have made it closer still as the Pumas pushed hard to break down New Zealand, being defied at the death when they forced two lineouts close to the try line but could get over from neither.