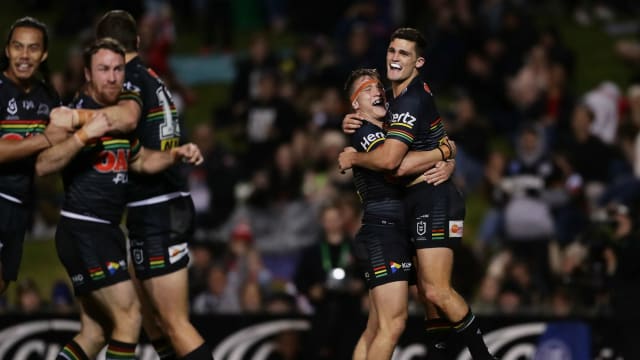 Nathan Cleary sparkled on his return as Penrith Panthers extended their winning run to seven NRL matches with a 40-18 rout of St. George Illawarra Dragons, while New Zealand Warriors edged out Cronulla Sharks.

Cleary recovered from an ankle injury that ruled him out of the State of Origin decider to pull the strings in an emphatic victory at Panthers Stadium on Friday.

The halfback and James Maloney linked up brilliantly as the Dragons were blown away in the second half, having only trailed 16-12 at the break.

Cleary scored one of seven Penrith tries and was on target with six out of seven strikes from the tee on a miserable night for Paul McGregor's men, who have lost three in a row and missed the rested Ben Hunt.

Mikaele Ravalawa, Josh Kerr and Paul Vaughan crossed for a Dragons side put to the sword.

Green won it with his boot after he and Kodi Nikorima contributed tries, with scores from Briton Nikora, Chad Townsend and Sosaia Feki unable to prevent Cronulla from slipping to a fifth successive defeat.