This Week in US Sports: Paul sticking around, MLB pitchers keep throwing at batters 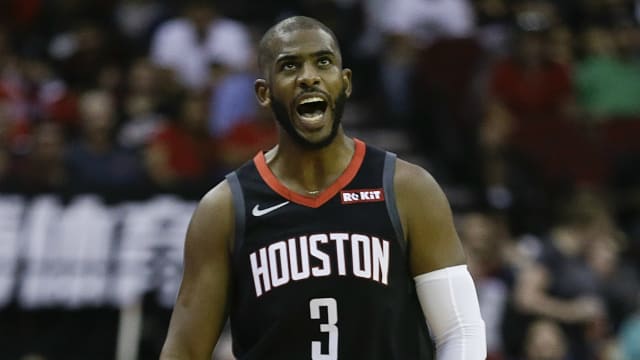 Chris Paul did not get what he wanted, but he is apparently not too mad about it.

In the meantime in MLB, batters really need to start watching their heads.

And in the NHL a ton is happening, and yet, nothing actually is.

The Oklahoma City Thunder had hoped to move Paul quickly after acquiring him in a package for Russell Westbrook last week, but that is apparently not going to happen.

Paul is likely to start the season in Oklahoma City, according to ESPN, and could play out a good portion of the campaign, or even longer, there.

Oklahoma City reportedly tried to move Paul to the Heat, but their proposals were not to the liking of Miami, so Paul, and his three years and more than $100million left on his contract, will stay with the Thunder.

Fortunately, both Paul and the Thunder reportedly see value in him sticking around, so it is not a total loss for either party.

Presti: “Getting a player of Chris’ caliber gives us another experienced playmaker and leader, while the additional draft picks continue to allow us to further commit to the long-term vision that we are embarking on for the Thunder.” pic.twitter.com/4mxXM6ilQg

It is that time of year. Baseball players are throwing at each other again and two pitchers were suspended for their actions on Wednesday after throwing at the heads of opponents a day earlier.

Philadelphia Phillies reliever Hector Neris was mad at himself so he threw at David Freese.

Then, Los Angeles Angels reliever Noe Ramirez threw at Jake Marisnick for breaking his catcher's nose and giving him a concussion.

Both players were suspended for three games. Both men will appeal.

For some reason there was a lot going on in the NHL this week. There were several signings and a somewhat notable trade.

- The Chicago Blackhawks traded Artem Anisimov to the Ottawa Senators for Zack Smith.
- Minnesota Wild re-signed Ryan Donato to a two-year deal after he excelled following his trade there for Charlie Coyle at the deadline.
- The Washington Capitals re-signed Jakub Vrana to a two-year deal.
- Colorado Avalanche signed J.T. Compher to a four-year deal but still have not given Mikko Rantanen an offer.

We have signed JT Compher to a four-year deal.#GoAvsGohttps://t.co/7KJUgmzCeG

All of these men face holdouts if they do not get the deals they want, but with all of the contracts already handed out teams simply might not have enough money to give especially with a lower salary cap than many anticipated. There could be a lot of disappointed young players this offseason.

This is how much Deion Jones means to the Atlanta Falcons defense.

After going down early in the season to injury, Jones was still given a four-year, $57m deal on Wednesday. Jones played in just six games in 2018, but Atlanta clearly have no concern about his long-term health and locked him up accordingly.

The Falcons are due for a bounce-back season if they are healthy and Jones will be a big part of it.