Smith doesn't want to be traded by Mets 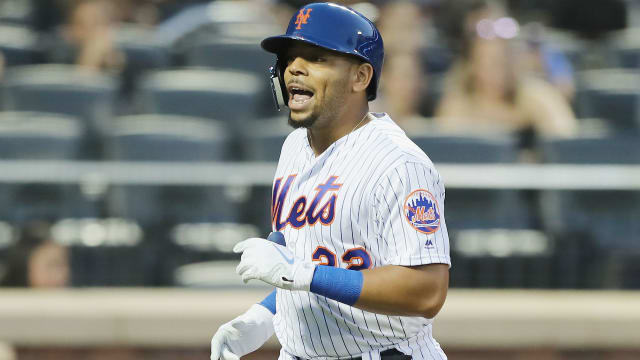 Dominic Smith does not want to leave the New York Mets.

The 24-year-old's name has begun to surface in trade rumours because he is behind star Pete Alonso at first base on the Mets' depth chart.

But, Smith said he hopes he is not moved.

"I don't pay too much attention to stuff I can't control," Smith told reporters. "I know baseball is a business at the end of the day. It's just how the game is. I love New York. I only want to play for the Mets. This is all I know.

"This is home for me and my family. I love it here and I'm just trying to establish myself and just get better every day."

Smith is having a breakout season for New York as he is slashing .294/.376/.536 with nine home runs and 18 RBIs in 81 games. The team have even started to play him in left field in order to get him more at-bats.

Mets manager Mickey Callaway praised Smith when he spoke with reporters after a 14-4 win over the Minnesota Twins.

"Offensively, we knew he was capable of this," Callaway said, via Newsday. "You could see the sweet swing, the plate discipline, his ability to go the other way, his ability to pull the ball. I think his ability to move around and play multiple positions and do it pretty well is the surprising part and the thing that we're kind of proud of right now."

If you’re in a pinch, call @TheRealSmith22.#MustChttps://t.co/HZI3CBTBqapic.twitter.com/8kqNnYdTUR

The Mets are expected to be sellers before the July 31 trade deadline and they are reportedly exploring moving Zack Wheeler, Jason Vargas and Todd Frazier, among others.

New York, however, entered play on Thursday on a four-game winning streak and just five games out of the second wildcard spot with a 44-51 record.