Giants throw spanner into trade deadline with sweep of Rockies 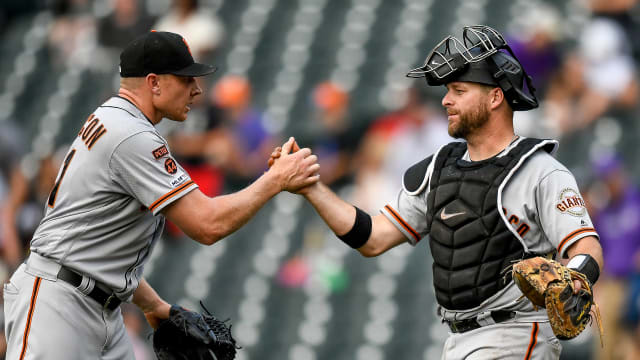 The San Francisco Giants completed a sweep of the Colorado Rockies to complicate the National League (NL) West in MLB.

With San Francisco's 11-8 win over the Rockies on Wednesday, the Giants swept a four-game series over Colorado and are now a half-game up on the Rockies for third in the West.

Even more complicated, San Francisco are 2.5 games out of the second wildcard spot in the NL, and if they really wanted to, they could consider buying and getting into the race in Farhan Zaidi's first year running the organisation.

The Giants have some talent and have had some good performances this year, but their starting lineup averaged 29.2 years of age on opening day, Madison Bumgarner is likely to leave in free agency and Jeff Samardzija has just one year left on his deal. It is time to rebuild and the Giants know it.

Because the Giants dominated the Rockies so thoroughly, Colorado are starting to consider making some moves. And if Colorado decide to sell, the trade market changes massively. Jon Gray and Scott Oberg could become available, Daniel Murphy could be on the move and maybe even Jake McGee could be considered as a chip.

Murphy could fetch a hefty price on the market and might just be the best bat available, McGee would possibly be the best non-closer lefty out there and Gray is a former top-three pick. The Rockies could get huge returns on their investments if they decide to sell and teams could get some really valuable pieces.

The Giants did not just sweep the Rockies, they may have changed the landscape of the deadline.

We got the sweep! pic.twitter.com/w3sSh8IXlV

Amed Rosario went four for four with a home run, triple, two singles, three RBIs and a walk in the New York Mets' 14-4 win over the Minnesota Twins.

Jurickson Profar went two for three with two home runs and four RBIs in the Oakland Athletics' 10-2 win over the Seattle Mariners.

Jesse Chavez gave up seven earned runs in 0.2 of an inning in the Texas Rangers' loss to the Arizona Diamondbacks.

Justin Smoak really should not have run to second base on a long single to center in the Toronto Blue Jays' loss to the Boston Red Sox.

The Indians are within four games of the Twins. They could get to within three on Thursday and they have Trevor Bauer (8-7, 3.65 ERA) on the mound. The issue for Cleveland is Matthew Boyd (6-7, 3.95) is on the mound for the Tigers. He is a hot commodity on the market, as well. There are a lot of interesting storylines surrounding this game.