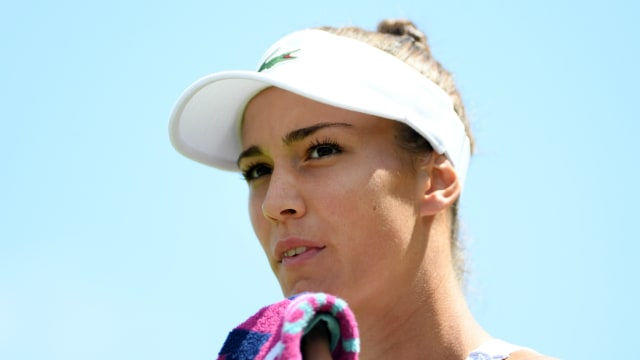 Second seed Caroline Garcia was shocked at the Ladies Open Lausanne on Wednesday, downed in straight sets by Bernarda Pera.

Pera, ranked 85th in the world, proved too strong in a 6-2 6-4 victory to set up a quarter-final meeting against Xinyun Han.

The left-hander won the last five games of the first set and never looked back and said afterwards her second serve was key.

"You can say I'm satisfied. I played well," Pera said.

"She's a tough opponent and I'm thrilled to be in the next round. I think she was struggling a lot with my second serve.

"I was able to break her a couple of times and that's what made the difference."

.@bernarda_pera takes the final four games to knock out No. 2 seed Garcia at @WTA_Lausanne!

Vikhlyantseva will play third seed Alize Cornet in the last eight, the Frenchwoman coasting to a 6-1 6-1 success against Jasmine Paolini.

Also on Wednesday, Laura Siegemund and Kristyna Pliskova won at the Bucharest Open.

Sixth seed Siegemund defeated Lara Arruabarrena 7-5 6-3 and Pliskova did it even easier, cruising past Ysaline Bonaventure 6-0 6-2.