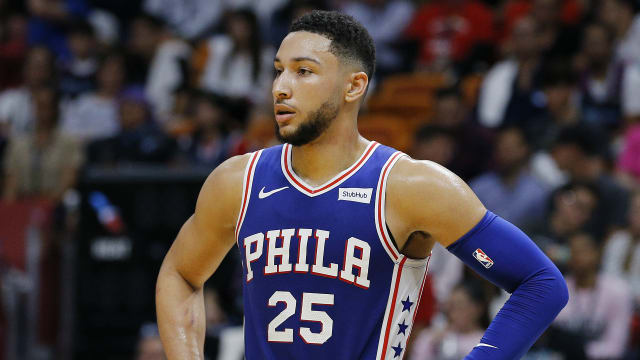 Philadelphia 76ers star Ben Simmons will not play for Australia at this year's FIBA World Cup, though he will feature in exhibition games against the United States.

After initially making himself available for August's World Cup in China, Simmons announced on Tuesday that he will skip the tournament and instead focus on the upcoming NBA season with the 76ers.

While he is set to sit out the World Cup, Simmons will travel to Australia for a pair of games against Canada in Perth on August 16 and 17 before facing Team USA in Melbourne on August 22 and 24.

"I wanted to let everyone know that after consulting with my representation, I've made the difficult decision to forego playing in the World Cup in China this summer," Simmons – who has signed a new five-year contract with the 76ers – said in a statement via Twitter.

"I will still be heading back home to Australia to host my camps as well as train and play with the Boomers in the upcoming exhibition games.

"I'm really excited about the talent we have on the Boomers squad, especially moving close to 2020 where I will be honoured and humbled to represent my country on the world's biggest sporting stage at the Olympics in Tokyo.

"Ultimately, we decided it was best that I use the time in September to return to Philadelphia to acquaint myself with my new team-mates and prepare for the upcoming NBA season."

The 76ers selected Simmons with the first pick in the 2016 NBA Draft and he has played a large role in the team's resurgence as an oversized, do-it-all playmaker.

Philadelphia put together one of the most talented starting line-ups in basketball last season, featuring Simmons, Joel Embiid, JJ Redick, Jimmy Butler and Tobias Harris as they finished third in the Eastern Conference before falling to the Toronto Raptors in the second round.

The 76ers lost Butler and Redick this offseason, but acquired Josh Richardson and Al Horford, giving them tremendous defensive potential.