Morgan's future depends on his drive and desire, says Strauss 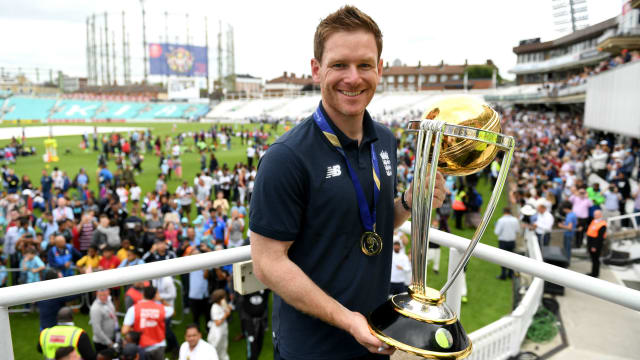 Andrew Strauss believes Eoin Morgan will need to take time to consider his future as England's one-day captain in the wake of their Cricket World Cup triumph.

Having been appointed as skipper shortly before a shambolic 2015 World Cup for England, Morgan has overseen a stunning turnaround in fortunes that culminated with Sunday's dramatic final victory over New Zealand at Lord's.

A day on from that win, outgoing head coach Trevor Bayliss backed the middle-order batsman to lead the team in next year's ICC T20 World Cup, which will take place in Australia.

Former England captain Strauss feels much will depend on whether Morgan - an ex-team-mate of his at Middlesex, as well as at international level - has the motivation to continue after achieving his primary goal.

Strauss, who also served as managing director of England Cricket before stepping down in 2018, told Sky Sports: "There is no doubt that if he wants to carry on then he will have incredible support from his team-mates, from the ECB and from the nation.

"All he needs to do is reflect and think about what's next for him and what's his motivation and drive and desire.

"If he has got that motivation then 100 per cent carry on but if he hasn't then pause for thought, because the only reason that we won the World Cup is because he was so committed to what happened on Sunday. If that commitment is not there then it is a time for him to think."