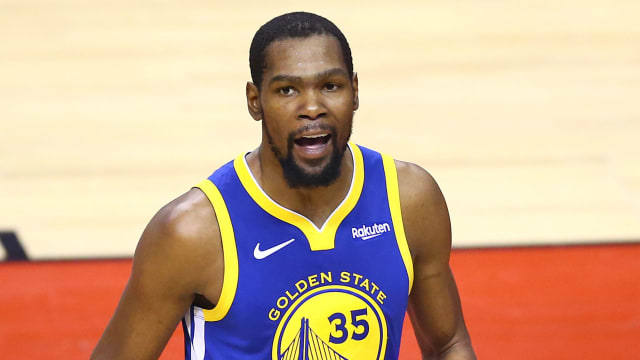 Kevin Durant swapped the Golden State Warriors for the Brooklyn Nets because he loves the "system", according to general manager Sean Marks.

Durant joined the Nets via free agency after winning two championships and two NBA Finals MVPS with the Warriors.

Recovering from an Achilles injury sustained in the Finals defeat to the Toronto Raptors, Durant thought highly of Brooklyn and their style of play, which is one of the reasons he chose the Nets over other suitors in free agency.

Marks told WFAN on Tuesday that in his first conversation with Durant after the announcement, the star said: "I love the system. I love how you guys play. I see how hard you guys play ... you were never out of games. We could never take you guys lightly."

Marks stood by the fact he did not know Durant's choice to join the Nets until he announced it on Instagram just a few minutes after free agency began on June 30.

"What we knew was we were either getting a teleconference call with Kevin that night or we were going to potentially get a meeting," Marks said.

"We'd seen some media reports earlier in the day that Kevin had crossed several teams off his list and we were still one of them [being considered]. And those reports were there for everybody to read. And when Kevin posted it on The Boardroom Instagram site, that was news to all of us in the office."

Marks remains excited about the addition of Durant, despite him recovering from an injury that will likely have him sidelined for the upcoming season. Brooklyn also signed Kyrie Irving and DeAndre Jordan.

Irving joined Durant after he opted out of his deal with the Boston Celtics following a number of reports surfaced about the turmoil he faced at TD Garden.

"I'm not going to lie, there's been a couple of times I'm definitely excited about — Kevin for sure, the whole group and really the challenge of getting all these guys together on the same page and watching how it unfolds," Marks said.

"I think that's the magic and that's the real special piece where you see elite talent ... want to play together and see who's going to sacrifice what and who's going to bring what to the table and just see how they all mesh."