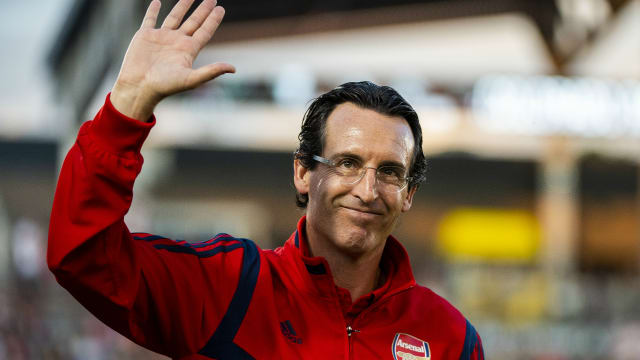 Unai Emery said Arsenal are looking to sign "very big, very expensive players" as the Gunners try to boost their squad ahead of the Premier League season.

It has been a quiet transfer window so far for Arsenal, who have been linked with moves for Celtic left-back Kieran Tierney, Saint-Etienne teenager William Saliba and Real Madrid's Dani Ceballos.

Arsenal fans want to see investment amid frustration with the club's owners and last season's fifth-place finish in the Premier League.

Speaking ahead of Wednesday's International Champions Cup match against Bayern Munich, Arsenal head coach Emery told reporters: "We are taking with the patience and with the calm because we really want to sign players who can help us with a big performance, and also because we think in the team we have very good players and young players and we also need to take the best player in some positions.

"Really, I can say to our supporters that we are going to have a very good team with the players that are there now and also with three or four players who can help us in a few days."

Here's how he responded

Arsenal director Josh Kroenke told fans to "be excited" over transfers and Emery added: "Yes. Really we are speaking about the big players and because we are starting thinking about our team and our squad now, and we have very good players and very good young players that can progress to take and get big performances with us.

"Other players can come here to help us. We need, really, that they will come with a big performance and also our target is to achieve three or four players who really improve our team and our squad now.

"We are being very, very demanding and we are first speaking about the possibility to sign very big, very expensive players and the first player in our list is our first target. And after, if we cannot achieve that, then the second. But we are thinking every time that they are going to improve our squad."

Ceballos is reportedly close to joining Arsenal from LaLiga giants Madrid on a season-long loan deal, having been linked to London rivals Tottenham and AC Milan.

Asked about Spain international midfielder Ceballos on Tuesday, Emery said: "I don't want to speak about the names. But Ceballos is a very good player."