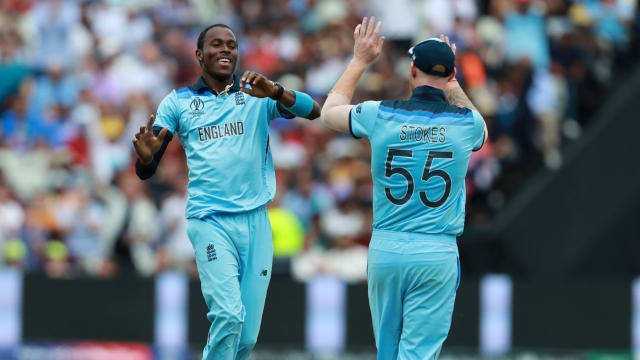 Jofra Archer has revealed the encouragement he was offered by Ben Stokes before Sunday's dramatic Cricket World Cup final Super Over.

Stokes' heroic effort with the bat - making an unbeaten 84 - saw England dramatically take New Zealand to an additional six balls, where the Durham all-rounder starred again to set the Black Caps a target of 16 to win.

With more experienced options snubbed, England then turned to new boy Archer to deliver the over that would make or break their entire tournament.

But Archer was not alone in the moments leading up to a potentially career-defining spell, with Stokes at his side to give advice.

Stokes had seen the World Twenty20 final slip away from England in 2016 as he conceded four consecutive sixes to West Indies' Carlos Brathwaite, making him well-placed to speak to Archer.

The Barbados-born star later disclosed those crucial words of advice as he recovered from a first-ball wide to limit New Zealand to an agonising 15.

"Stokesy came over and told me, win or lose, today will not define me as a player," Archer said. "He told me everyone believes in me and Rooty [Joe Root] also came over and gave me some inspirational words.

When you wake up and realise you're a #CWC19 world champion...

"Stokesy told me that, even if we lost, it wouldn't be the end of the world, but in saying that I'm really pleased we won.

"He probably went through the same feeling when he bowled the last over [in 2016] and that is why he came over to me.

"He just told me that there would be a World T20 next year and we'd have more chances to win in the future, so it helped."

Stokes discussed the decision to hand Archer the ball in good humour, saying: "I definitely wasn't going to bowl it after last time.

"Jofra Archer, I backed him all the way, the talent he's got is incredible and he's showed up on the world stage and shown how good he is."