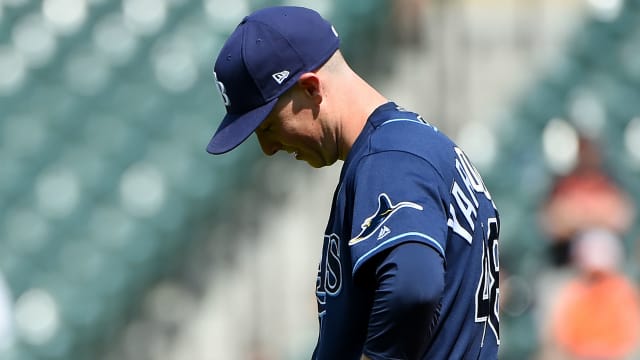 The Tampa Bay Rays were three outs away from history during their win over the Baltimore Orioles in MLB on Sunday.

The Rays used an opener against the Orioles, which was first made popular by the team. It would have been the first time multiple pitchers pulled off the feat as all 23 previous perfect games have been thrown by a single pitcher.

Ryne Stanek started the game for the Rays and pitched two innings. Ryan Yarbrough took over and threw the next six innings without allowing a baserunner. He stayed on to start the ninth, but it was there that Tampa Bay's impressive outing was sullied.

Yarbrough allowed a single to leadoff hitter Hanser Alberto to end the team's chance at history in a 4-1 win.

"It would have been pretty sweet to finish it off like that," Stanek said, via MLB.com. "If you're the first to do something in baseball, you did something."

Baltimore went on to record three hits in the losing effort.

Austin Meadows and Mike Brosseau each hit a home run to highlight the Rays' offensive efforts.

Anthony Santander delivered the Orioles' only run with an RBI single.

Austin couldn't visit Eutaw during the break, so he figured he'd check it out now. #RaysUppic.twitter.com/lkqsTgPojy

Robinson Cano hit a home run in his second consecutive game as the New York Mets beat the Miami Marlins 6-2.

Chicago White Sox shortstop Jose Rondon made a throwing error in an effort to start a double play in the ninth inning against the Oakland Athletics, who turned it into a scoring opportunity to win 3-2.

Sometimes you just gotta take what the defense gives you

And we will gladly take this #RootedInOaklandpic.twitter.com/mIhJuhMNa2

The Houston Astros love grand slams. Jose Altuve hit the team's ninth slam of the season, which is the most in MLB. No other team has recorded more than five.

The Milwaukee Brewers are trying to catch up to the National League (NL) Central-leading Chicago Cubs but first have to get through the Braves. Atlanta hold the top spot in the NL East and have won seven of their past 10 games. The Brewers will send Adrian Houser (2-3, 4.01) to the mound with the hopes of jump-starting the second half of the season. The Braves will counter with Max Fried (9-4, 4.29).