Morgan will be up for T20 World Cup - Bayliss 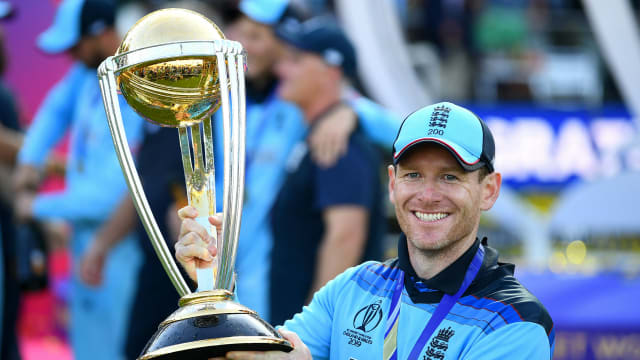 Trevor Bayliss expects Eoin Morgan to want to lead England into next year's T20 World Cup amid discussion over whether he will remain as captain following their dramatic 50-over World Cup triumph at Lord's on Sunday.

England lifted the trophy for the first time as they claimed an incredible win over New Zealand, prevailing on number of boundaries after the scores finished tied following each side's 50 overs and then a Super Over.

The successful end to England's four-year journey to world supremacy on the ODI stage, the vision for which was laid out by Morgan after their humiliating 2015 campaign, has led to talk of the Irish-born batsman possibly stepping down as skipper.

However, Bayliss, for whom the victory marked his final white-ball game in charge, believes Morgan will want to stay on and try to guide England to another world title in Australia.

As England continued their celebrations at The Oval on Monday, Bayliss said: "There is a T20 World Cup coming up in 12 months which I am sure he will be more than up for. [But] that will be an individual decision for him.

"Morgs is the leader of not just the guys in the team but off the field as well. He is the one who has really driven this forward.

"I think the rest of the boys try and run through a brick wall for him and the effort that Ben Stokes put in yesterday was just an example of that."

Bayliss was not fully convinced he could bring England's dismal record at World Cups to an end when he was appointed four years ago, but the Australian will leave his post after the Ashes vindicated for a steadfast commitment to aggressive and positive cricket.

"I wasn't sure [when I started] but it was certainly a country with a long history of cricket and I knew that they desperately wanted to do better than they had been doing," Bayliss added. "[I was told] no stone would be left unturned in an effort to get that World Cup.

"It's justification for how we went about it for the last four years. At different times we have copped a bit of criticism but we had an end goal in mind and this is the result."