World Cup glory was written in the stars for Stokes, believes Root 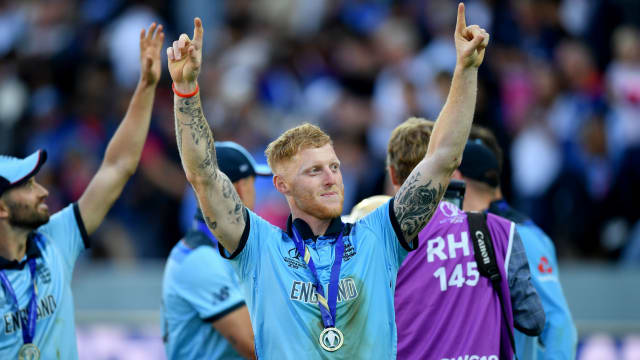 Joe Root felt it was "written in the stars" for Ben Stokes to be England's Cricket World Cup saviour as the hosts edged an epic final against New Zealand by virtue of a superior boundary count.

Stokes' excellent 84 not out saw England equal the Black Caps' 241 at Lord's on Sunday, while there was still no separating the sides after the match went to a Super Over.

Alongside Jos Buttler, Stokes managed 15 for his team from the additional six balls and when Martin Guptill was run out coming back for a second off the final delivery of New Zealand's over, the home side triumphed having struck more fours and sixes.

It was redemption for man-of-the-match Stokes, who was smashed for four successive maximums by West Indies' Carlos Brathwaite in the last over of the World Twenty20 final three years ago.

"Unbelievable. Wow. Hard to sum it up. What a day, what a tournament," Root said.

"Everyone has done what's been asked of them, we've come through difficult periods, held it together and performed under pressure.

"It was written in the stars for Ben, he's been through such a tough time, I'm so happy for him, I couldn't be more proud and pleased for him in particular."

England captain Eoin Morgan, meanwhile, was thrilled to see four years of planning come to fruition after his side were dumped out in the group stage in 2015 – an elimination that prompted a complete overhaul of the team's white-ball philosophy.

"There wasn't a lot in that game - commiserations to Kane [Williamson] and his team, the way they play their cricket is really worth aspiring to and the example they lead is hugely commendable," Morgan said.

"It's been a four-year journey, we've developed a lot particularly in the last two years, we find it hard on wickets like that, like all good teams do. Sport's tough at times but to get over the line today means the world.

"I was being cooled down by Liam Plunkett, which isn't a good sign.

"The guys in the middle kept us cool, they're very experienced, the best in the world, it's calming at times, there's not a lot between the teams, so we're delighted to lift the trophy today."