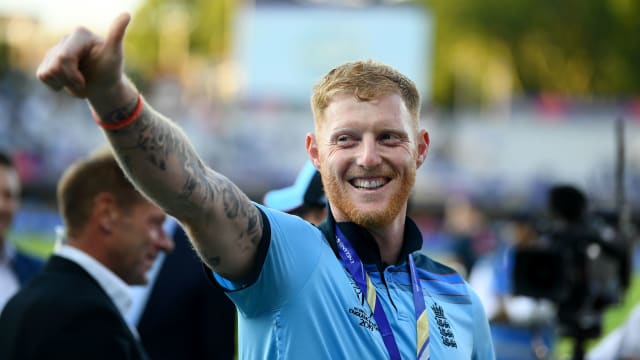 A furious Ben Stokes kicked his bat up in the air before whipping off his helmet and rocking his head back with his eyes shut as he trudged back to the famous Lord's pavilion.

The England all-rounder was in a complete state of disbelief at what had just happened and so was everyone else fortunate enough to witness the greatest Cricket World Cup final of all time.

Stokes had made a magnificent, mature 84 not out but was left crestfallen when Mark Wood was run out going for a second run to win it off the last ball.

That kept New Zealand's hopes of being crowned world champions for the first time alive under blue London skies on a glorious Sunday evening.

The brilliant Stokes was consoled by Wood as headed back towards the Long Room at the home of cricket, but the New Zealand-born former England vice-captain would have another shot at redemption.

What a game! Ben Stokes, flat out, but unbeaten.#CWC19Finalpic.twitter.com/1XopHaR1qX

Stokes and Jos Buttler (59) had rescued the hosts - who were 86-4 on a slow track chasing a seemingly modest 242 to end their long wait for a maiden World Cup triumph - as their fifth-wicket stand of 110 made it very much game on with the tension palpable.

That only increased when England needed 15 off what anxious fans, perched on the edge of their seats throughout an absorbing contest, presumed was the last over.

Stokes launched Trent Boult over the ropes and had six more from the next delivery when Martin Guptill's bullet throw from the deep struck his bat and ran away to the fence when he lunged desperately to get home coming back for a second.

Just three needed to win off two balls, surely England had one hand on the trophy? The buzz around the ground grew louder than ever, but Adil Rashid and Wood were run out as New Zealand's astonishing fielding ensured the scores were tied, with Boult breathing a sigh of relief having stepped on the rope attempting to catch Stokes in the penultimate over.

Bewildered spectators from various parts of the world were off their seats wondering what happens next as a shell-shocked, exhausted Stokes - who passed 400 runs for the tournament - went down on his haunches like a weary boxer who had just come through 12 rounds.

A Super Over was the answer, so Stokes kept his pads on and pulled himself off the ropes for another chance to be England's hero.

The 28-year-old duly struck eight of the 15 runs he and Buttler took off Boult as they played with freedom after knuckling down with great application earlier in the day.

Kudos to these game-changers, who dragged England from the pits and took them to the verge of history!#WeAreEngland | #CWC19Finalpic.twitter.com/V12I3wUf5h

Then it was the turn of Jofra Archer, who was charged with the task of racing in for England, the hopes of a nation he only qualified to play for a matter of months ago on his shoulders.

The Barbados-born quick started with a wide, then had his head bowed after Jimmy Neesham dispatched him into the crowd with a huge blow.

Five runs from three balls for Kane Williamson's men to make history. Just as it seemed there could surely not be another twist, it came down to two required off the last delivery.

Kiwis sat with their head in their hands as Archer steamed in and bowled to Guptill, who clipped the paceman to Jason Roy on the midwicket boundary and darted to the non-striker's end.

Roy whipped in the throw as Guptill frantically ran back for a second, yet with the World Cup within the opener's grasp, Buttler whipped off the bails and one of the great sporting venues erupted.

While there were puzzled looks from cricket-lovers who had travelled from various parts of the globe, the England players sprinted off into the outfield in front of the grand old pavilion knowing they had conquered the world.

Victory by virtue of having struck more boundaries than the Black Caps, who suffered the most painful loss four years after being thumped by Australia in the final.

Rollercoaster of emotion, that’s why we love this sport @englandcricket that will go down as a classic, congratulations #CWC19#ENGvNZpic.twitter.com/d9xfi4VsxD

New Zealand fans had been up in anticipation of celebrating their finest hour, but instead sat in a state of shock as Stokes clutched a bottle of champagne after picking up the man of the match award.

Stokes had been left out of the squad for the previous World Cup and suffered the anguish of being taken apart by West Indies all-rounder Carlos Brathwaite in the last over of the 2016 World Twenty20 final, costing England glory.

Eleven months after he was cleared of affray following a brawl in Bristol, Christchurch-born Stokes was a national hero, having shattered the dreams of his country of birth.

As 'Heroes' was played over the sound system with England fans dancing and singing, it was mission accomplished for Eoin Morgan's men.

In 2015 they returned home from the tournament in Australia and New Zealand in shame after failing to make it out of the group stage, but now they were on top of the world on home soil.

Trevor Bayliss, Andrew Strauss and Morgan played huge parts in totally transforming England from ODI failures to the best in the world, but nobody could have scripted the manner in which they attained glory, in the most dramatic of fashions.