Rumour Has It: Atletico close to shock deal for Madrid's James 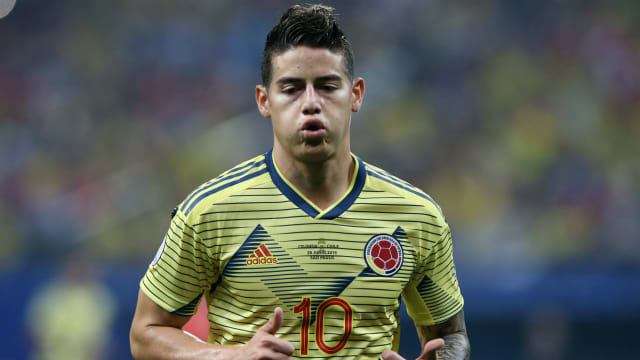 The future of James Rodriguez has dominated headlines this off-season.

Napoli have been tipped to sign James after Bayern Munich opted not to take up their permanent option to sign the Real Madrid midfielder.

However, James could be set to remain in the Spanish capital.

Atletico Madrid are close to completing the signing of James Rodriguez from LaLiga rivals Real Madrid, according to Marca.

Napoli have been favourites to lure James to Italy, with the Serie A side keen to reunite the Colombia star and head coach Carlo Ancelotti.

However, negotiations have dragged on and James – who spent the past two seasons on loan at Bayern Munich – is reportedly keen to make the switch across town.

- According to le10sport, Barcelona have offered Philippe Coutinho in a straight swap for Paris Saint-Germain star Neymar. LaLiga champions Barca reportedly do not have money to spend after paying Antoine Griezmann's release clause.

- Sky Sports reports Arsenal have made an improved £25million offer for Celtic left-back Kieran Tierney. Meanwhile, BBC Sport claims the Gunners have not submitted a bid for Lille forward Nicolas Pepe as they cannot afford the €80m-rated star.

- Harry Maguire has told Leicester City he wants to leave amid growing speculation he will join Manchester United, says the Daily Mail.

- According to the Daily Mail, Bayern Munich have not given up on signing Chelsea youngster Callum Hudson-Odoi. The Bundesliga champions are reportedly set to make a £45million offer. Bayern are also interested in Tottenham right-back Kieran Trippier, Sky Sports understands.

- Juventus goalkeeper Mattia Perin is close to moving to Portuguese champions Benfica, according to Gianluca Di Marzio. Perin is looking for regular football following Gianluigi Buffon's return to Turin, where Wojciech Szczesny is the number one.

- Juventus could use Moise Kean in a deal to sign Inter outcast Mauro Icardi, according to FCInterNews.it. Rai Sport has also claimed Juve could take Icardi on loan with an option to buy for €40million.