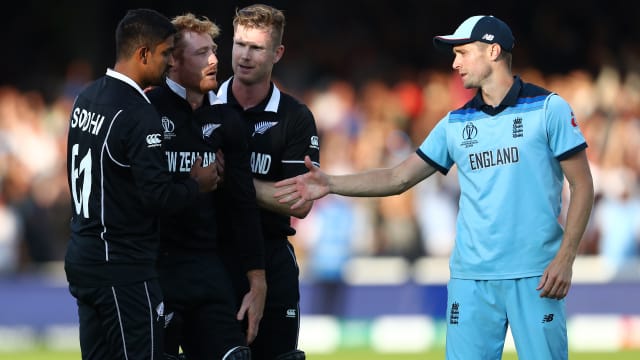 A hurting Jimmy Neesham believes he will think about the end of New Zealand's incredible Cricket World Cup final loss to England every day for the next decade.

England secured their first World Cup title in an extraordinary final at Lord's on Sunday, winning courtesy of having hit more boundaries.

The Black Caps made 241-8 after electing to bat and England matched that, forcing a Super Over, during which the teams were again unable to be separated.

Neesham and Martin Guptill batted for New Zealand in their Super Over, the former hitting a six, but a run out when coming back for a second off the final ball saw the hosts claim their win.

That hurts. Hopefully there’s a day or two over the next decade where I don’t think about that last half hour. Congratulations @ECB_cricket , well deserved.

"Hopefully there's a day or two over the next decade where I don't think about that last half hour. Congratulations @ECB_cricket, well deserved."

It marked New Zealand's second straight loss in a World Cup final, following on from their defeat to Australia in 2015.