Milner at the double as Liverpool see off Bradford City 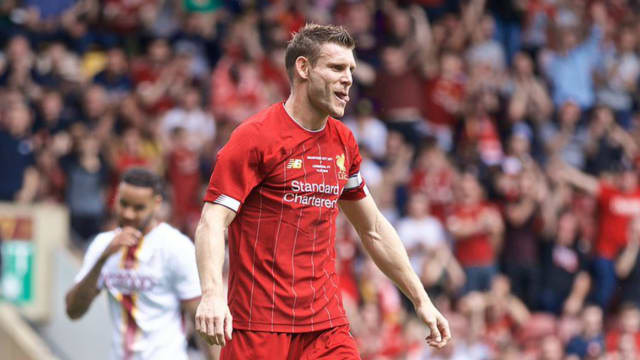 James Milner scored twice as an understrength Liverpool won 3-1 at Bradford City in a pre-season friendly on Sunday.

Mohamed Salah, Virgil van Dijk and Jordan Henderson were among the big-name absentees ahead of the Premier League club's forthcoming tour to the United States.

That left midfielder Milner to provide the first-half entertainment in a match staged to raise funds for the charity co-founded by former Liverpool and Bradford defender Stephen Darby, who was diagnosed with motor neurone disease in September.

Ex-England international Milner opened the scoring with a shot that deflected in off James Vaughan's head, then converted a penalty after Ryan Kent was hacked down inside the area.

Rhian Brewster squeezed in a third from a narrow angle before Jurgen Klopp made 10 changes at half-time, only goalkeeper Simon Mignolet continuing after the break.

The Reds, 6-0 winners over Tranmere Rovers on Thursday, next face Borussia Dortmund in Indiana, which could see the return of several regulars.