It wasn't meant to be - Williamson philosophical after World Cup heartbreak 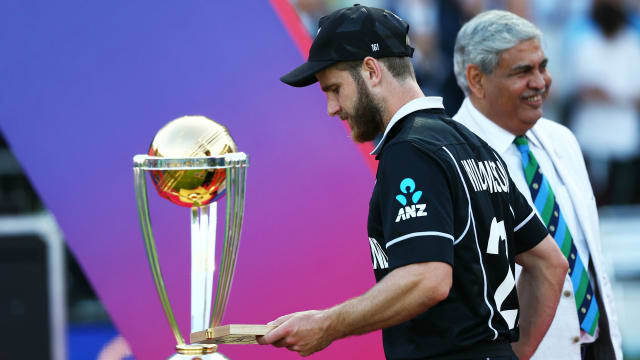 Kane Williamson's New Zealand were "shattered" after a heartbreaking loss to England in the Cricket World Cup final but the Black Caps skipper remained magnanimous in defeat.

The tournament hosts lifted the trophy for the first time at Lord's after Sunday's epic final was decided by the finest of margins.

New Zealand posted 241-8 having opted to bat, and the scores were level at the conclusion of the chase, Ben Stokes making 84 not out while Mark Wood was run out coming back for a second off the final ball that would have secured victory for England.

Stokes and Jos Buttler plundered 15 from the Super Over and New Zealand matched that tally – Martin Guptill short of his ground in trying to pick up a two off the last delivery as the home side prevailed due to their superior number of boundaries in the initial 50 overs.

"It certainly wasn't just one extra run, so many small parts in that match could've gone either way, congratulations to England, they've had a fantastic campaign and they deserve the victory," said Williamson, who was named player of the tournament for his 578 runs at 82.57.

"It's been challenging, the pitches have been different to what we expected, there was talk of 300+ scores but we haven't seen many, thanks to our side and the fight they showed in this campaign, it took a huge amount of heart to get us to this stage. It just wasn't meant to be today.

"The guys are shattered at the moment, it's obviously very devastating, they've performed at this tournament at such a high level, it's pretty tough to swallow at this stage but a fantastic effort from our guys all round.

Your 2019 @cricketworldcup runners-up  Hold your heads up boys, you can be seriously proud of that effort  #CWC19#ENGvNZpic.twitter.com/Vym34Ju9jj

"We felt runs on the board was going to be challenging, as it proved. We may have liked another 10 or 20 but [we thought] perhaps 240 might be enough. We put England under pressure, it was a fantastic game of cricket, both sides showed fight and heart.

"To go to the last ball, it's tough to separate but credit to England and there's a lot of positives in this experience for our boys."

Stokes enjoyed a huge slice of fortune in the final over when, with nine needed off three, he scampered a two and then inadvertently deflected the ball to the boundary in diving back to his crease, earning a bonus four runs for his team.

"That was a bit of a shame, wasn't it," a typically understated Williamson remarked. "That's the game we play, those things happen from time to time, you just hope it doesn't happen at times like that, it's tough to nit-pick, it just wasn't meant to be for us."