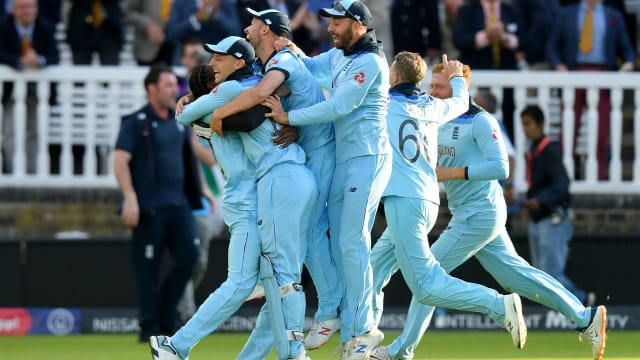 Ben Stokes and Jofra Archer were the heroes as England finally claimed their maiden Cricket World Cup title in the most remarkable fashion imaginable, defeating New Zealand courtesy of a higher boundary count following a Super Over at Lord's.

In truly extraordinary scenes, the two teams in Sunday's final could not be separated in 100 overs of regulation play - England posting 241 all out in reply to their opponents' 241-8 - and then managed 15 runs apiece in the one-over shootout that followed.

The final act saw Martin Guptill needing to hit two runs off Archer, the Barbados-born paceman who only qualified for England in March, but the Black Caps opener was run out coming back for a second from the final delivery, unable to beat Jason Roy's accurate throw from deep midwicket.

England, who hit 24 boundaries in their 50 overs compared to New Zealand's 16, were therefore able to celebrate a first final victory at the fourth attempt, with Stokes having played a key role in both their initial run chase and the Super Over to exorcise the demons of his last-over misery at the hands of Carlos Brathwaite in the 2016 World Twenty20 final showpiece against West Indies.

REMARKABLE! ENGLAND HAVE DONE IT!

Congratulations, @englandcricket - winners of the men's @cricketworldcup for the very first time!#LoveLords#CWC19Finalpic.twitter.com/2jC6VA6RjM